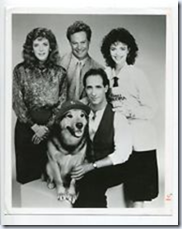 It was extremely difficult it to set up a fourth broadcast TV network. When Fox came along with plans, it was assumed by everyone it would fail. But it was a good time for it:  there had been an increase in independent TV stations* looking for programming.  And Fox started small – originally with shows only on Sundays.  But even that wouldn’t mean much if they didn’t have good programming.  And Duet was one of the shows that they based their original Sunday schedule on.**

It was a romantic comedy where Ben Coleman (Matthew Laurence) was in love with Laura Kelly (Mary Page Keller). Their best friends were yuppies Richard (Chris Lemmon***) and Linda Phelps (Alison La Placa), and Laura had a younger sister Jane (Jodi Thelen) who was just a little bit ditzy.

The show was hardly groundbreaking, but survived by good writing. The plots were pretty standard, but there were plenty of funny line, and the worked like all good comedy – by being unexpected.

In addition, the cast was very appealing.  The two breakout characters were Linda and Jane.  Alison La Placa was wonderful – self centered, controlling, and very very funny.  Jodi Thelen was even better, as the ditzy comic relief.  As a matter of fact, the leads of the show took a back seat to the other characters as time went by.

In the second season, Linda became pregnant.  The final episode had her giving birth.  Then the show did something unusual:  the third season took place three years later.  The baby had grown and Ben and Laura had married – unusual for a romantic sitcom in that it was not shown.  Toward the end, Linda took a job in a real estate agency.

The show was cancelled, but that job was the basis for a spinoff:  Open House.  Alison La Placa was the star, with Lemmon and Keller (her character now divorced) joining her.  Added to the new cast was a up and coming comedian named Ellen DeGeneris.****

The show didn’t catch on, but La Placa did.  Or tried to.  She starred in three sitcoms in the next three years, and all failed.  None of the other actors fared much better, though all have worked relatively regularly since.

But the show did what it needed to do: be an entertainment that was strong enough to keep Fox afloat.

****Who was the equivalent to Jodi Thelen in the new show, but not as good.

Posted by Chuck Rothman at 3:18 PM

I actually liked Mr. President. It was funny, but also a bit serious. I guess it didn't do well, because at some point they stopped filming and and recorded of video tape. They also brought in Madeline Kahn to make it ha-ha funny. They just made it worse.

I watched Fox's schedule from the beginning in 1987. MARRIED took a few episodes to hit its stride but really cooked when it did. MR. PRESIDENT just kept getting worse with all the tinkering. I remember reading that Scott became angry with Johnny Carson over the production troubles (Carson did have a big prime time hit with AMEN on his own network, NBC at the time). Fun to remember that time and place; even when a Fox show ended up being terrible you could tell they were trying to do something the Big Three weren't.