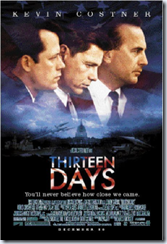 Sometimes history makes the best drama.  The Cuban Missile Crisis is a case in point, the closest we came to having the Cold War turn extra crispy.  Thirteen Days manages to distill the tension down into a single movie.

The move is history as John F. Kenney (Bruce Greenwood) tries to walk the tightrope of having the Soviets remove their nuclear missiles from Cuba without making the wrong move and starting a war.  The story is told through the eyes of JFK advisor Kenny O’Donnell* (Kevin Costner) as the administration tries to figure out the best way to deal with the situation, with advice coming from all directions.  Especially chilling is General Curtis Lemay (Kevin Conway) who would love to start dropping nukes on Moscow.

Despite everyone knowing the results, the movie ramps up the tension as Kennedy tries to figure out Soviet intentions, while avoiding an excuse for war.  The film used some documents that had been recently unclassified to shed light on what was involved.

Despite good reviews, the film flopped, not even coming close to earning its budget.  It was released late in the year, probably to get some Oscar buzz, but the buzz never materialized.  It’s still an gripping look into a frightening few days.

Posted by Chuck Rothman at 9:49 PM

There are other problems here as well. As you alluded to, Kenny O'Donnell wasn't an important enough historical figure or an interesting enough personality to justify his prominent role in this telling of the story. The role was obviously beefed up in order to add Kevin Costner's star power to the film. But it just doesn't work. They should have just had him play JFK instead (although Bruce Greenwood does a terrific job of that).

Overall, not "great," but merely good.