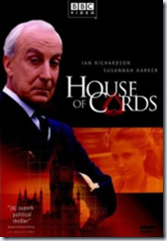 The Netflix series House of Cards has been a major critical and popular success, so much so that its origin has been given short shrift.  But the original British series is at least as good and is, in may ways, better.

Note:  Here be spoilers for both series.  Proceed at your own risk.

Francis Urquhart (Ian Richardson) is the Conservative Party whip in the UK.  After missing out on a cabinet appointment, Urquhart decides to oust the Prime Minister and take his place.  Encouraged by his wife Elizabeth (Diane Fletcher), he starts an affair with a political reporter Mattie Storin (Susannah Harker) and quietly undermines the prime minister and discredits all potential rivals.

If you’re watching the Netflix version, this sounds familiar.  But Urquhart is different from Netflix’s Frank Underwood.   The differences between the US and UK political system make a big difference in the story, since Urquhart is able to directly work his way up to prime minister without an election, while Underwood has to be more indirect.  The relationship between Urquhart and Mattie is more perverse and Elizabeth takes a smaller but more significant role in the affair (she suggests it to him).

The delight of the series is Ian Richardson.  He takes his cue from Shakespeare’s Richard III* and plays it more menacingly, while, at the same time, more charming.  He takes the audience into his confidence in a way that makes him seem appealing. While Spacey is a favorite actor of mine, Richardson plays the character with a little more depth and is far more unpredictable.

There’s also the matter of his catchphrase.  Urquhart often uses the line “You might very well think that.  I couldn’t possibly comment” as a way to lead the press the way he wants.  He gives the words different emphasis to make different points.

The series was successful enough to spawn two sequels:  To Play the King, where Prime Minister Urquhart goes up against the new king of England, and The Final Cut, where his administration finally falls.  It is exhilarating television.

Posted by Chuck Rothman at 9:19 PM

While I haven't seen the Netflix Americanized version yet, I have seen BBC's version -- all three "novels" -- twice so far.

Though Spacey is an extremely talented actor with serious stage presence, I expect his version to suffer greatly by comparison.

The British version is one example of how absolutely spectacular a TV drama can be -- but almost never is.

I like "the Great and Forgotten" novel and I'm so grateful to read it here in your blog.

I like "the Great and Forgotten" novel and I'm so grateful to read it here in your blog.

The UK original is in every way superior to the US remake. Spacey is a decent actor, but Richardson ties with Alastair Sim and Michael Hordern as my all time favorite UK actors. His twinkly malevolence just couldn't be replicated by an American. I also find the Parliamentary system lends itself much better to drama than does our system in the US. That's one (of many) reasons that I prefer The Thick of It to Veep and that Borgen is my all-time favorite political drama, putting The West Wing to shame. In the interests of full disclosure (although it's probably pretty obvious) even though I was born and raised in New York, I've nevertheless been an ardent Anglophile since the early '60s and an ardent Europhile since the early '70s. I even lived and worked in Denmark for a year (1974) until the company that paid me collapsed and I, very reluctantly, returned to the US. Great blog, btw. I'm working my way backwards.

There are certainly lots of details like that to take into consideration. That may be a nice point to bring up. I offer the thoughts above as normal inspiration but clearly there are questions just like the one you carry up where the most important thing might be working in honest good faith. I don?t know if greatest practices have emerged round issues like that, but I'm sure that your job is clearly recognized as a good game. Each boys and girls really feel the influence of just a moment’s pleasure, for the remainder of their lives. online casino