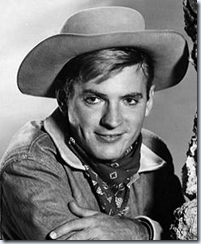 (1957-61)
Based on a story by Michael Fessler and a screenplay by Frank Davis and Winston Miller.  Original TV screenplay by Devery Freeman
Starring Will Hutchens
IMDB Entry
Wikipedia Entry

In the late 50s, the major movie studios start to think that if you can’t beat ‘em, join ‘em and made the jump into TV production.  Disney was first with Disneyland on ABC, but that was an aberration.* But Warner Brothers realized that there was money to be made in TV production and made a deal with ABC with a rotating group of three shows:  Cheyenne, King’s Row, and Casablanca. Cheyenne became a hit, so they spun it off and added two more westerns, Bronco and the subject of today’s lecture, Sugarfoot.

Tom Brewster (Will Hutchens) was a young would-be lawyer in the TV west, traveling from one job to another and, of course, always running into trouble.  What made him different from other TV cowboys was his deliberate lack of machismo.  He drank sarsaparilla, spoke softly, and didn’t usually carry a gun (though he was a crack shot when necessary).  Because of this, he was called “Sugarfoot” – one step below “Tenderfoot.”

It was a somewhat different sensibility from the other westerns of the time.**  Brewster was awkward and polite to everyone, and preferred to out think and out reason his foes rather than meet them in a showdown.  Occasionally, he’d meet up with his outlaw cousin, the Canary Kid (Hutchins again), and there’d be mistaken identity galore. The show had a light touch to it, playing off Brewster’s seeming naivety. As far as I know, he never got his law degree.

The show ran for four seasons. Afterwards, Hutchens moved on to the sitcom Hey Landlord and as a guest star.

**Though similar in many ways to the later movie Support Your Local Sheriff, which costarred Jack Elam, who had a recurring role in Sugarfoot.  Small world.

Posted by Chuck Rothman at 2:45 PM