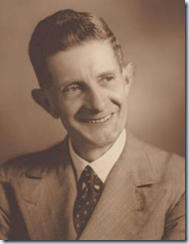 Mystery stories are about gimmicks:  the gimmick that makes the murder stand out, the one that leads the detective to the solution.  And, of course, the detective him- or herself.  And its these gimmicks that create great detectives.  Arthur Upfield used an off-beat detective and a talent for creating great mysteries to create a long career that is underappreciated in the US.

Upfield was English, but moved to Australia as a boy, where he spent most of his life.  After WWI, he worked on various stations in the outback and started writing.  His first novel, The House of Cain, was successful enough, but his second, The Barrakee Mystery, introduced his signature character:  Inspector Napoleon “Bony” Bonaparte.

Bony* had an Aboriginal mother and white father (something that was extremely daring when the book came out in 1929), and leaned heavily on this Aboriginal background.  It wasn’t mystical mumbo jumbo, though, but rather the application of both keen observation and a knowledge of the natural world of the Australian bush.  Bony was sure of his own abilities and proud of never having let a case go unsolved.

The mysteries themselves were also clever and well constructed.  Upfield was always on the lookout for new twists (usually one that related to Australia).

In one occasion, The Sands of Windee, he even did it too well,  The “Murchison Murders” were committed by an acquaintance of Upfield who used it to dispose of bodies of people he killed.  He didn’t follow the method perfectly, though, and Upfield testified against him at the trial.**

Upfield also wrote some other mysteries,*** but it was Bony who made his reputation.  He completed 29 novels with the character until his death in 1964.  His work is still well known in Australia, of course, and in the UK, but most American mystery fans have never heard of him.  His Bony books can be found, though, and are worth the effort to dig up.

**He later wrote a nonfiction book about the case.

***The Beach of Atonement, which was next to impossible to find, was recently reprinted.  I designed the cover.

I read most of the Bony books in the late '70s and early '80s. Great period pieces and worthy of being treated on film or TV as Holmes, Miss Marple or Pairot have been.
When touring Australian in 1986 I encountered a few Aboriginal police officers. Though sorely tempted I refrained from asking if their inspiration was Bony.