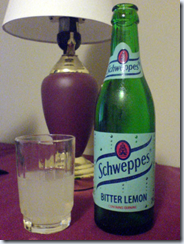 When I was a kid, I had oddball taste in food.  Among other things, I didn’t care for soda.  I didn’t like the carbonation – it stung – and was used to drinking milk, so the sweetness had no appeal.  But in my early teens, I discovered a soda I actually enjoyed drinking:  Schweppes Bitter Lemon.

Bitter lemon had a long history, first developed in the 1830s as a mixer.  It was a combination of lemon juice and tonic.  It’s name described it:  it had a slightly bitter taste and the tang of lemon juice.

It was a change from the usual sugary sodas for me.  One difference was the presence of a little bit of lemon pulp. Even though I wasn’t concerned about “all-natural” in those days, the little bits of lemon floating made it seem more real to me, and the fact that it wasn’t cloyingly sweet made it very refreshing.

It was never a very popular brand in the US.  If you found it in a supermarket, it would be with the cocktail mixers with bloody mary mix and swizzle sticks.  You had better luck in a beverage store and, possibly, in liquor stores in states that allowed for its sale. For me, it was a real treat.

There was also a Bitter Orange, which was the same thing, only the orange juice was sweeter.  I haven’t seen it in years, and it seems that they stopped making it in the US in 2011.*

There are some attempts to market the flavor in the US, though it’s limited to knockoffs of Bitter Orange.  Polar, for instance, has Orange Dry, which is a less-sweet orange soda, but with no tonic, and it was the taste of quinine that made Bitter Lemon so good.

I probably wouldn’t drink it enough now to support the brand if it came back, but I hope that someone might try.

Yes, yes, yes. I was a great fan of Schweppes Bitter Lemon and even like Schweppes Bitter Orange (which wasn't quite as good). I still check out the drink-mixers aisle from time to time hoping it gets brought back.

Polar makes a lovely Bitter Lemon to this day. I keeps Gin company in my go-to evening cocktail.

I don't know how old you are but the Schweppes Bitter(s)enjoyed pretty high popularity...at least in the Northeast US when I was a youngster. They regularly aired spots on television (with a distinguished looking British gentleman with a beard IIRC) and it was sold in nearly all supermarkets. I loved that stuff and I believe there was also a Bitter Lime product as well.

Can't imagine why it went out of favor. Plenty of straight tonic water is sold every year, under a variety of labels.

Its also still available in Israel! I just had it this summer!

Sitting here in NE drinking the Fever-tree stuff mentioned.
Doesn't seem as good as the Schwepes I remember as a kid in in the UK....but still good!!!

Had Schweppes Bitter Lemon in Europe this spring and loved it. Wish it was available here in the US

For all Schweppes Bitter Lemon lovers - check out eGourmet on Amazon, they have it for sale in the 1.5 litre bottle.

I buy this whenever and wherever I can find it. It, and the Fever Tree version, makes the best Gin & Tonic. (As one Englishman told us, in a G&T, the tonic is much more important than the gin.)

Discovered bitter lemon (and vodka) while traveling overseas. If was very popular and instantly became my preferred relaxation beverage. I had been so disappointed that it has been unavailable. Recently found it on amazon. Pricy with the shipping but at least available.

I also remember loving both bitter lemon and bitter orange when I was very young. Other than those two flavors or tonic, I detested sodas and have never developed a taste for them. They were too carbonated, way too sweet (and left you thirstier than before you drank them) and so I developed a love of ice water or the aforementioned bitter sodas. Even most tonics today are revoltingly sweet. Seagrams is the best, but still not the way it was.

Excited to find Schweppes Bitter Lemon in Starsky's ( a chain grocery store in Ontario which imports food items from Europe especially Poland) today. I paid $3.29 for a 1.5L bottle. Now I know I can buy it whenever I want!

I drank liters of this in Switzerland and Germany in the last two weeks, and was super sad to discover it isn't in the States. I will try the Fever Tree, which they probably have at Binny's.

In Massapequa, NY, Pathmark sells Canada Dry Bitter Lemon in 1L bottles for $1.50. Check food.com for recipe to make your own.

Why is it that so many excellent products from the past disappear? Is it a corporate conspiracy or what? I'd kill for a case of the Schweppes Bitter Lemon. But I've settled for a very fine substitute--Polar Bitter Lemon....it's a close relative and so much better in summer than lemonade or ultra-sweet carbonated concoctions.

Last time I had Schweppes Bitter Orange was in Athens, Greece-my native country- in the 70's. Since then every time I go back can't find it! It's gone! I grew up with it and I loved it.

I had bitter lemon this summer in all of the Balkan countries. ....Serbia Croatia Bosnia and Czech republic. ....

In Singapore, a friend told me Bitter Lemon was the Queen's favorite drink. I fell in love at first sip. Schweppes bitter lemon, no substitutes.