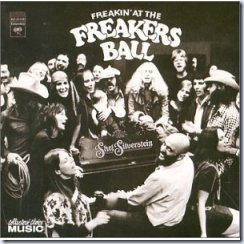 Yes, everyone knows Shel Silverstein.  When the Sidewalk Ends and The Giving Tree are classics of children’s literature, still in print after 50 years. But Silverstein was a complete talent.  In addition to writing and cartooning, he was a songwriter, with songs that often were far different from what you’d expect from a children’s book writer.*

Silverstein grew up in Chicago and started out as a cartoonist, with some of his work appearing in Army magazines while he was in Korea in the 50s.  He began appearing in major magazines and had a series of special articles for Playboy.  In 1963, after publishing several books of adult cartoons, he went into children’s books with Lafcadio: The Lion Who Shot Back.

Silverstein took up music in college and starting to write successful songs in the 1950s.  By the mid-60s, his songs had been recorded by Peter Paul and Mary (“Boa Constrictor”), Johnny Cash (“25 Minutes to Go”), and the Irish Rovers (“The Unicorn”).  Cash then had one of the biggest hits of his long career with Silverstein’s “A Boy Named Sue.”

That was typical of Silverstein.  He was, after all, a cartoonist, so his songs were often funny, with a sardonic sense of humor that sometimes bordered on the macabre.**

Silverstein had one weakness.  While a great songwriter and top-notch accompanist, his voice was no great shakes.  In 1970, he was composing a musical score for Who is Harry Kellerman and Why Is He Saying Those Terrible Things About Me? when a producer brought in a group that was working hard to break in, thinking they’d be perfect for Silverstein’s material.  Evidently they were, because Dr. Hook and the Medicine Show rose to prominence on the strength of his material.

Their first song from him, “Sylvia’s Mother,” was a massive hit.  It’s an over-the-top ballad about trying to talk to an ex-girlfriend and a parody of that sort of breakup song.***  The album was a big hit.

They followed it up with Sloppy Seconds, which was only Silverstein material.  “On the Cover of the Rolling Stone” was another hit, a funny and satirical look at being a rock and roll star.

Other Silverstein songs for Dr. Hook and the Medicine Show include “Roland the Roadie and Gertrude the Groupie,” “Freaking at the Freaker’s Ball,” “Penicillin Penny,” and “I Got Stoned and I Missed It.” As the titles indicate, the songs were concerned with sex and drugs and were all sardonically amusing.  But Silverstein could also be serious:  “The Queen of the Silver Dollar” is a wonderfully joyous love song.

Dr. Hook started moving on to other songs and songwriters, with further hits, but without Silverstein.  He continued to write for other artists, including the delightful “One’s On the Way” for Loretta Lynn.  He did put out an album with many of the songs that were covered by Dr. Hook, but with little success.

Not that it really mattered to Silverstein’s career.  He already had several irons on the fire with the books and everything else.  And he is very well regarded in music circles (and in country music especially) for his songs. It is an aspect of a great artist that sometimes gets overlooked.

**”25 Minutes to Go” is about a man on death row, who ends up hanging at the end.  Johnny Cash sang it in Folsom Prison – true gallows humor.  “Boa Constrictor” has the singer being eaten by a snake.

***At first, a lot of people hated it because they didn’t get the joke.  Even now, some people still think it’s meant seriously, but, really, how seriously can you take a song with the refrain, “And the operator says forty cents more for the next three minutes, please.”?

Nice little post. You should check out www.willsheff.com, where he wrote a long post "We Never Have To Be Alone" about Dr. Hook and a live concert in 1974.