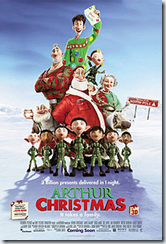 I mentioned recently that I was a big fan of Aardman Animation. But one problem with Aardman is that they’re partnered with Sony Pictures; thus it wasn’t obvious to me that Arthur Christmas was their work.  I fixed that problem and discovered what is probably the best Christmas film since A Christmas Story.

The story is set at the North Pole, where Santa Claus is actually a job description, passed down from  son to father for centuries.  The current Santa (voice of Jim Broadbent) has been modernized by his oldest son Steve (Hugh Laurie) with a giant hi-tech sleigh, the S-1, and thousands of elves on board.  Arthur (James McEvoy), his younger son, is a gung-ho Christmas enthusiast, but far too clumsy to do anything other than answer children’s letters, most notably one from Gwen  (Ramona Marquez), who has many questions about Santa and to whom he writes a personal assurance that he exists and that Gwen will get the present she wants.

The high-tech delivery goes off without a hitch – except one.  Gwen’s present remains on the S-1, undelivered.  Arthur insists it has to be, but Steve and Santa are tired and missing one child out of billions doesn’t seem like a big deal.

But to Arthur, it is.  Joining up with his Grandsanta (Bill Nighy), they saddle up the old sleigh*, get some reindeer, and head off with the stowaway Bryony (Ashely Jensen), a wrapping elf** with the same sense of duty as Arthur.  Naturally, things don’t go very smoothly.

The film is very funny, with gags coming fast and furious without a stop. But the film had a heart, and isn’t afraid to show it.  I also like the fact that there really isn’t a bad guy.  Steve has his shortcomings and is clearly not the ideal choice for Santa, but he isn’t a bad person at heart, and his methods are essential.  The film also avoids showing people teasing Arthur for his clumsiness; though they make comments behind his back, you don’t see any out-and-out cruelty as the elves and family try to indulge him and get him out of the way.

The cast is stellar.  Jim Broadbent and Bill Nighy have never appeared in a bad movie and they bring the characters to life.  Hugh Laurie has a lot of fun as Steve and James McEvoy is wonderful as Arthur, putting across his crazed, sweet idealism.  Imelda Staunton is a subtle delight as Mrs. Claus, who is clearly where Steve gets his organizational skill.  And it was great to hear Ramona Marquez.***

The movie suffered the fate of other Aardman films.  With the name “Aardman” obscured, people might not realize who made it, and the film was, like most Aardman films, more interesting in interesting and quirky characters than recognizable stereotypes.  It did adequately, but got a bit lost among bigger names.  It probably got hurt the most by opening the same week as The Muppets, which aimed at a similar audience but was a known quantity.

Luckily, it’s out on video.  Get a copy and see a real Christmas classic.

**Whose job it is to wrap presents.

***An amazing child actress.  She is a regular in the UK TV series Outnumbered, which depends on her ability to improvise a scene.  I suspect that her letter to Santa was at least party written by Ramona herself, who is was natural comedian by the time she was seven