Olive the Other Reindeer (TV) 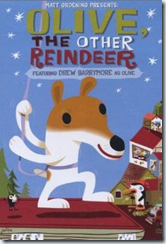 There are times when you realize a TV show or movie is a classic, even before you get to the end. I don’t get that feeling often, but halfway through Olive the Other Reindeer, I knew that this was one.

The story is about Olive (voice of Drew Barrymore), a dog.  Olive loves Christmas, but when Blitzen is injured and can’t fly, she is disconsolate. Her pet flea Fido (Peter MacNicol)* hears Santa saying “Olive the Other Reindeer, and convinces her it means he expects her to help out.  Olive is not like other dogs, as her owner Tim (Jay Mohr) points out, so she decides to go to the North Pole to help out.  Her plans are discovered by an evil mailman (Dan Castellaneta), who hates Christmas because of the burden of extra mail, plus the fact he’s been on Santa’s naughty list.  He tries to stop her.  So, with the help of Martini (Joe Pantoliano), a con man penguin, she goes out to save Christmas.

Now, the “Save Christmas” plot has been done many times. To make it work, you have to do something different and Olive has plenty of this. The story is filled with puns (especially the character names), callouts to other shows (Olive passes Frostbite Falls on her way to the North Pole), good and funny songs (written by producer Matt Groening , creator of The Simpsons), and general silliness (Olive gets out of a tight spot by opening an envelope from “Deus ex Machina”).  The humor throughout is very layered, and you notice more jokes the more often you view the show**.

The voice cast is wonderful.  Drew Barrymore captures the wide-eyed innocence of Olive perfectly and Dan (Homer Simpson) Castellaneta makes the mailman a terrific comic villain.  Joe Pantoliano’s Martini make him the comic highlight of every scene he’s in.

The show mimicked the style of the artist of the original book, J. Otto Siebold.  It looks like paper cutouts of the characters in the books.  It’s a big change from the usual style of animation, and nothing like any American or Japanese animation at all.*** People are used to the three-dimensional computer animation, or something like Anime, or even the Disney style; this may have been a little distracting.

That may have been why it seems to have vanished.  Only the Cartoon Network is showing it this year, and that’s in time slots a long way from prime time.  The show seems to have been a labor of love by Groening, Barrymore, and the rest of the cast.  It’s a shame it’s not better known.****

***It seems to me to be more European in style, like the works coming out of Czechoslovakia in the 60s.

****I purchased a copy of  it at the local supermarket; the cashier was confused, wondering why there was a dog on the cover.

Posted by Chuck Rothman at 4:49 PM