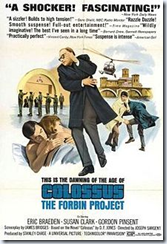 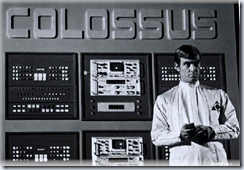 Posted by Chuck Rothman at 7:42 PM

Seeing this as a young teenager, I disliked it. Part may be that I saw it on TV, where it was no doubt cut up. Part of it was the era of movies with negative endings, which I really don't like in large doses.

You're the second person who said positive things about the movie lately, so I may need to watch it again.

Good point about P. K. Dick. I hadn't thought of that.

One other exception (besides H. Ellsion (who, for some obscure reason, has made his name a Trademark) is Frank Herbert, whose "Dune" was unfortunately butchered on a planetary scale by Lynch and the De Laurentiis[es].

Asmov wrote a few good "computer" stories. One relevant to these days is "Franchise", in which the world's biggest computer (miles and miles of relays and circuits) selects one more-or-less completely average man (always a man), and by questioning him, learns his preferences and then casts the votes for all the offices in the country.

Does "Forbidden Planet" count as a nod to Shakespeare?

I love this movie. I consider it a forgotten classic. The direction is extrordinarily good, and I like the unnamed Bobbie Kennedy impersonator playing the not-too-distant-future president (This movie having been made in the very brief period between when he announced he was gonna run and when he was killed). Direction is fantastic for a movie that, with a few exceptions, takes place in about five rooms. Showed it to my son recently, and he thought it was up there with Forbidden Planet. As a kid, the unhappy ending really shocked the crap out of me. As a younger man, it stuck with me because while the good guys lost, they lost by getting EXACTLY what they said they wanted. Colossus' speech at the end echoes the president's speech in the beginning very closely. Just a great film. I can't say enough good things bout it.

It was billed as COLLOSSUS:THE FORBIN PROJECT by the time it made network TV only a couple of years later... seem to recall it being on NBC...