John Carpenter made his mark with Friday the Thirteenth  and worked primarily in horror and dystopian science fiction with plenty of action.  Dan O’Bannon wrote Alien and also other action and horror films.  So you’d figure if the two of them would get together, the result would be an action-packed SF or horror film.  You’d be wrong.  The result was a comedy, with a decided lack of action.

Dark Star was unusual in that it was a low-budget sf film without monsters being front and center.  The ship that gives the movie its title goes around the universe destroying unstable planets.  As its acting commander, Lt. Doolittle (Brian Narelle) says, “Don’t give me any of this intelligent life stuff; find me something to blow up.” 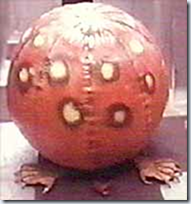 But the ship has problems.  Its commander, Powell (Joe Saunders) is dead and in a cryogenic locker, Sergeant Pinback (Dan O’Bannon) isn’t really Pinback at all, Talby (Dre Pahich) spends his time in the observatory, watching the stars, and  Boiler (Cal Cuniholm) likes shooting off the ship’s laser indoors.  The ship is out of toilet paper, the ship’s computer is cloying, the intelligent nuclear bombs they carry are becoming a little too intelligent, and the ship’s mascot – an alien that looks like a beach ball with claws – is becoming rambunctious.

Even worse, everyone is terminally bored.  Doolittle wishes he was back on Earth, where he could go surfing and everyone else goes about their tasks with the enthusiasm of a dead slug.

The ship is probably the most disorganized, cramped, and dirty in SF films.*  It looks like it’s been lived in for a year and the crew have long since given up on niceties like cleaning up or even personal hygiene.  There’s a stench on ennui in everything everyone does and says; Carpenter has said it was Waiting for Godot in space.

The set, though, was clearly a forerunner of Alien, which also has a lived in look (though not as lived in).  In addition, O’Bannon clearly expanded the subplot about the alien mascot – with mixes horror with the comedy – into the basis for Alien.

The movie was shot for on $60,000 as an expansion of a student film of Carpenter’s, so there was no question it would earn back its cost once it went into wide distribution.  It launched the careers of both Carpenter and O’Bannon, though none of the actors had any further success.

Carpenter made his mark with Halloween, not Friday the 13th.