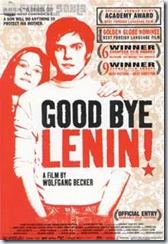 What people often forget about totalitarian regimes is that there are people under them -- and not the ones in power -- who like them. Good Bye, Lenin is a charming fairy tale about what happens to one of these people when the regime fails.

The story is about Alex Kerner (Daniel Brühl), who lives in communist East Germany in 1989.  His mother Christiana (Katrin Saß) is a gung-ho committed communist who, when she sees her son at an anti-communist rally, has a near-fatal heart attack and falls into a coma, just before the Berlin wall comes down.

When she awakes several months later, capitalism has come to East Berlin.  But not for Christiana.  Her doctor has told Alex that the slightest shock could cause a second heart attack, and, since the end for communism would be the greatest shock of all, Alex decides to pretend it didn't happen.  With help from his girlfriend Lara (Chulpan Khamatova) and his friend Denis (Florian Lukas), Alex is able to show his mother that her dreams came true:  the Communist government has triumphed over all of Germany.  Denis helps to edit old news reports to keep up the charade, and they find old jars of food and refill them so that Christiana won't realize the brands are no more.

The movie is a charming mix of comedy and pathos.  Alex is clearly a loving son, and the extent he goes to to fool his mother is very funny.  At the same time, it's more than just a joke.  He learns some things about himself that he never knew, as well as the reason for Christiana's gung ho communism.

The film got good reviews and some awards but, like most English language films, didn't get much notice and faded away.

I saw this movie a couple of years ago and it is one of my favorite foreign films ever. Very enjoyable!