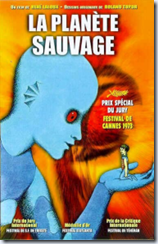 While fantasy films are the major part of the animated feature canon, it's strange that there is so very little science fiction in animated form. It would seem to be an ideal medium:  space battles are cheaper to film when their done on celluloid and paper.  Yet there have been relatively few of them.  Wikipedia lists 74, any many of those (and nearly all of the ones worth watching) appeared in the last 15 years.  Of those created before 1995, one stands out as the best:  Fantastic Planet.

It's set on the world of Ygam, a world populated by the Draags, creatures hundreds of feet high. Also on the planet are the Oms,* brought from their home planet, living wild, and considered vermin by the Draags.  Except for the few they capture and use as pets.

The movies follows the life of Terr (voice of Eric Baugin), who is orphaned as a baby by a bit of random and unthinking cruelty by some Draag children.  He adopted by Tiwa (Jennifer Drake) as a pet.  As he grows up, Terr finds a Draag learning headset and begins to learn about the world.  He eventually escapes from Tiwa and finds other Oms living wild.  But the Draags decide to make an effort to wipe out the wild Oms once and for all, and Terr must help lead the Oms to escape.

The concept for the movie was not new at the time,** and the plot alone is not the strength of the movie.  It survives on the visuals, portraying a truly alien world, with strange creatures and events that a visually stunning.  In a way, it reminds me of some of the creatures in Yellow Submarine -- just as imaginative and far more sinister.  Here's a sampling:

The film was from the vision of French director René Laloux, and was animated in Czechoslovakia, where the metaphor probably hit home pretty strongly.  It won prizes at Cannes and other film festivals, and critical acclaim in the US where it was distributed by Roger Corman.

The film does have flaws.  The ending is very rushed and cuts away from what should have been some very dramatic issues and simply says, "everything's solved now."  But the movie still does have emotional appeal, and the situation helps to overcome the problems.  The possibilities of animation and science fiction have rarely been better served.

**William Tenn's Of Men and Monsters had exactly the same setup, and was far more subtly handled, and with more character depth.

Posted by Chuck Rothman at 4:03 PM