The Life and Death of Colonel Blimp

The Life and Death of Colonel Blimp is one of the lesser known major productions of the 1940s (in the US, at least).  It is rarely mentioned in film histories, and was greeted with a good deal of scorn because of the nature and timing of its subject matter.  Its title implied a certain well-known character would be present, but that character wasn't even there in name (though the lead character looked like him).  Yet it is a charming and overlooked film with a lot to say.

The title comes from a series of satirical cartoons by British cartoonist David Low. In his hands, Colonel Blimp was a fat, mustachioed old man who spent his time in the Turkish bath and propounded idiotic nonsense about the nature of the army and war.  Blimp was stupid and ridiculous, and it was odd that Michael Powell and Emeric Pressberger chose the title of the film when they were saying something almost entirely opposite.

We are introduced to Major General Clive Wynne-Candy, who is captured as part of a war game exercise he's running when soldiers surprise him in the Turkish bath when the deliberately jump the gun.  Wynn-Candy (who at this point is made up to match the cartoon Colonel Blimp) is irate at this breaking of the rules and when his moustache is ridiculed, he attacks the leader of the soldiers, saying, "You don't know what it means."

The movie then goes back 40 years, where Clive Candy, a recent winner of the Victoria Cross in the Boer War, decides to go to Berlin to stop a German agent from making up lies about the British there.  He meets Edith Hunter (Deborah Kerr) and fights a duel with the German officer Theodor Kretschmar-Schuldorff (Anton Walbrook), who quickly becomes his friend as the recuperate in the hospital afterward.

Candy returns to England, and ends up fighting in World War I. Too old when World War II breaks out, he starts organizing a home guard.  And his paths continue to cross paths with Kretschmar-Schuldorff.

The theme of the film is about doing the honorable thing.  Wynne-Candy* is of the old school, where you shake hands with your opponent after the fight is over.  He comes to learn that things change.

The major delight of the film is in the details and the surprising emphasis. The lead up to the duel, for instance, is shown in fine detail as everyone discusses the rules and conditions.  Yet the actual duel is not shown, and I think the film is better doing it that way instead of going for the obvious.

The controversy was due to the character of Kretschmar-Schuldorff.  It takes nerve to portray a sympathetic German character in English at the height of the blitz, but Powell and Pressberger manage to pull it off**.  Still people did object. 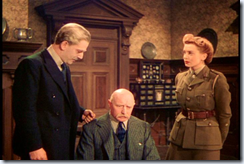 Of course, the film has some great acting.  Roger Livesey imbues the young Candy with a charming dash and vigor that ages realistically as the character ages.  Woolbrook's Kretschmar-Schuldorff is calm and charming, and is often the voice of reason to Wynne-Candy's delusions of honor.  In her first starring role, Deborah Kerr plays three roles as the loves of their lives.***

The film ran into problems with censorship.  The British government no doubt thought the title referred to the cartoon Colonel Blimp and thought an attack on the military.  Winston Churchill seems to have taken a strong dislike to it, since the cartoon Blimp was often considered to be referring to him.  Because of this, it was not shown in the US until 1945, where a modified form was released.  It was cut down further, so the full version (including the frame tale, which is where the movie drives home its message) was rarely seen.

Appreciation of the film has grown over the years, and it's now considered by most film buffs as a classic.  It was honored by a release in the Criterion Collection recently, with all the scenes restored and a wealth of additional material.  With luck, it will become known outside of the art house crowd and appreciated for its charm.

**It helps that Kretschmar-Schuldorff is anti-Nazi.