Chemistry between the cast can be a big factor in the success of a TV show, and it was the cast of The Good Neighbors that helped turned it into one of the greatest of British comedies.

At the time, Richard Briers was a star of British TV, starring in a handful of shows in for almost 15 years.  A comment of his about turning 40 got writers Esmonde and Larby to thinking, and the results was The Good Neighbors.

Briers was Tom Good, a draftsman working on such important projects as designing a hippopotamus to be given away as a toy in cereal boxes. Tom has just turned 40, and is tired of work and wondering what to do with his wife.  So he decides to chuck it all and live self-sufficiently.  In Surbiton, a suburb of London.  Out goes the back lawn and in comes a garden, chickens, goats and other animals.  He uses the dung to power the house and his excess crops to barter to get other items.  His wife Barbara (Felicity Kendal) joins in.  Though this does cause conflict with their best friends and neighbors Jerry and Margo Leadbetter (Paul Eddington and Penelope Keith).  Jerry thinks the idea is bound to fail, but is happy to put up with Tom's madness.  Margo, on the other hand, thinks the others are crazy, and is worried that the farm next door will ruin the quality of the neighborhood. 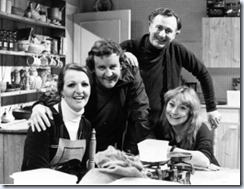 The show is funny due to the characters.  Tom is gung ho on living self-sufficiently and is constantly coming up with way to make it work.  Barbara is a bit more skeptical, but seems to get a kick out of the effort and its little triumphs and setbacks.  The two of them have one of the most ideal marriages in TV history -- they're both smart, witty, sexy, and deeply in love with each other.

Margo is the opposite.  She's is a strong believer in proper behavior, the type who wants everything to be just so.  She feels that the whole enterprise is doomed to failure.  Not that she won't help if called upon -- the Goods are her friends -- but she does get a bit uptight about the idea of pig dung.  Jerry is used to her quirks and perhaps secretly admires what Tom is doing, even if he knows he could never do it.

The acting is perfect.  Tom is a man with an idee fixe, but he's self-aware enough to know that sometimes he goes too far.  He can also the the humor in the situation.  He and Barbara trade quips that are almost up to the level set in The Thin Man.  Felicity Kendal is delightful at every turn.

Penelope Keith's Margo is often the butt of jokes for her lack of flexibility, but basically she's a good person underneath.  Jerry is more down-to-Earth, but indulges her and the Goods.

The show ran three seasons in the UK as The Good Life, so successful that the taping of the final show was attending by Queen Elizabeth.  A few years later, it started showing up in the US as PBS stations in the early 80s, but the name conflicted with an earlier failed sitcom of the same name, so it was retitled Good Neighbors,* where it became a popular PBS Britcom.

After the run, the cast moved on.  Paul Eddington became Prime Minister (in the classics Yes, Minister and Yes, Prime Minister).  Briers did more sitcoms, and appeared in a Doctor Who episode** among other things.  Penelope Keith went on to BBC stardom in To the Manor Born and other shows.  Felicity Kendal did stage work with Tom Stoppard*** and recently appeared in the Rosemary and Thyme mystery series and a Doctor Who Episode.****

While still well regarded in the UK, the show is forgotten in the US, partly because it only appeared in syndication on PBS, so the audience was small. But it's one of the delights of British comedy.

**"Paradise Towers," one of my favorites.

***I enjoyed her performance as Christopher in a televised version of Stoppard's farce On the Razzle. "Catch me a half-witted cab, you hansom fool."

Posted by Chuck Rothman at 8:59 PM

My wife and I discovered this program on PBS while living in Orlando, Florida in the early 1980s (we were friends with a couple who told us about the show). They also introduced us to "Butterflies," another great Britcom. I'd love to find this on DVD.

I saw a few episodes on PBS back in my undergrad days. The writing and acting were both terrific. I think it may have been on right after Monty Python and that's probably how I came to watch it.

Thanks, the show still runs on PBS here in Tacoma, WA and we never get tired of it. I first came in contact with it in New York in the early 80's.

Paul Eddington was also a double agent in an episode of "The Prisoner." I loved his character in Good Neighbors, kind of hard seeing "good old Jerry" as anything less.

Thanks, the show still runs on PBS here in Tacoma, WA and we never get tired of it. I first came in contact with it in New York in the early 80's.

Paul Eddington was also a double agent in an episode of "The Prisoner." I loved his character in Good Neighbors, kind of hard seeing "good old Jerry" as anything less.

Really loved this show, and I'm on some D-Link box that has a sub class of Netflix that has very little I like so I'm making a list to bug them..this is on my list !! I loved it and "To the Manor Born" !!