Who's in Charge Here? (book) 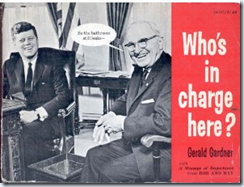 Political humor dates quickly*.  The only way to avoid this is to stay topical, something that radio and TV have managed to do.  It's much harder to do it in a book, but Gerald Gardner came up with the idea to have a series of books, each with some funny topical humor of the year.
Gerald Gardner was a TV writer, best know for scripts for The Monkees and Get Smart.** In 1962, he got the idea of taking news photos and adding humorous dialog that supposedly showed what the people were saying or thinking.  The book was called Who's in Charge Here?, and the cover photo showed John F. Kennedy sitting with Harry Truman, with Truman saying, "So the bathroom still leaks."
Despite the photos of political figures, the book didn't take a political point of view.  It focused more on the absurdity and foibles of the people involves, as well as commenting on what was shown in the picture.
The book was a smashing success.  So much so that Gardner continued with new editions every few years.  There was More Who's in Charge Here, Who's in Charge Here 1966, Who's in Charge Here: Watergate Follies, and many other variations on the theme.  The most recent version I can find was from 1996.
None were as popular as the original.  And I suspect the gentle ribbing you found in Gardner's books is out of place in today's more vicious style of political humor***.  It's hard to say how well the book hold up, but I think it's not too bad, since you only need to have a vague understanding of the events involved.
The books, though successful, were always just a sideline for Gardner, who was a very successful TV writer and producer both before and after the first volume came out.  It was a minor book, but an entertaining bit of political humor.
____________________________________________
*The clearest example to me was an Art Buchwald column on the Watergate hearings entitled (in our newspaper), "What We Have Learned So Far."  It was the funniest thing I ever read when it first came out.  Rereading it six months later, it was nowhere near as good.  And after a year, I couldn't find anything funny about it at all (I don't think it's was ever reprinted in any of Buchwald's collections).  Once you forgot the details he was satirizing, there was little left.
**A favorite Get Smart episode was "The Diplomat's Daughter," which had one of Smart's best villains:  "The Craw."  ("Not Craw!  Craw!!")
***At least, Gardner didn't suffer the fate of Vaughn Meader, who also joked about JFK.
Posted by Chuck Rothman at 5:24 PM

Not only do I remember this book, it (as well as the 70s book 'Trek Or Treat') -- it inspired me to do the same with Star Trek"! I believe my 91 year old Mom still has her much read copy of WICH? at our old house, and one of my favorite was of a European leader raising his arms in victory -- but the caption read "I'm turning in!"
Another was of JFK looking exasperated with his hand to his forehead, apparently 'saying' "Jackie, these bills from Oleg Cassini!" The memories of this book still crack me up, I'll have to look up our old copy.
You can see my Trek version on my new blog, which I'm still building:
http://trekkerscrapbook.wordpress.com/startrekomics/
Please read it and let me know what you think! Thanks, Therese

Gerard Garnder did not come up ith this. In fact, he worked for Harvey Kurtzman doing similar stuff and Kurtzman was pretty displeased at the fact that Gardner went off and had such a huge succes with it. Stan Lee did something similarin 1961. I am currently writing an artcile about these type of books and trace them all back to Shel Silversein's TeeVee JeeBees for playboy in the late fifties.