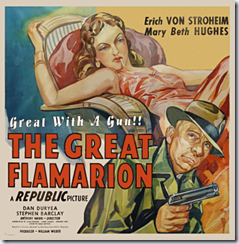 At at time when an obscure film like Detour has been rediscovered and hailed as a classic of the genre it is surprising indeed that The Great Flamarion is not similarly praised.  Yet Eddie Muller's Dark City, the definitive survey of the genre makes no mention of it, and it just doesn't have the cachet that other titles do.  Maybe the title sounds too silly for the seriousness of the story.  Maybe it's just that films from Republic Pictures are overlooked.  In any case, this is a fine, classic film noir movie that makes the most of its opportunities.

The film is shown in flashbacks.*  The Great Flamarion (Erich von Stroheim) is a vaudeville entertainer, a trick shot artist.**  Connie (Mary Beth Hughes) and Al Wallace (Dan Duryea) are his assistants, who are shot at every night.  But Connie -- who is something of a con artist when men is concerned -- grows tired of Al and his drinking, looking for greener pastures.  So she turns to seducing Flamarion and suggesting that the way to free her from Al is  . . . well, I think you can figure it out. 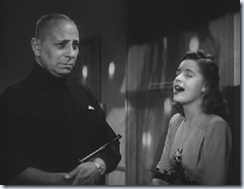 Erich von Stroheim is considered as one of the great film directors, though his output was small due to the fact that his obsessive perfectionism caused his movies to go way over budget and run far too long.  After the silent days, no one would allow him to director, so he turned to acting, and being billed as "The Man You Love to Hate" for his villainous roles.  But von Stroheim was more than just a villain, and when given a chance, could give his characters (usually stiff-necked military types) some nice depth.***  In this case, in invests some true pathos in the Flamerion, a man whose vaudeville act is his life and who has no real friends, the perfect target for Connie's scheme.  When he finally discovers he's been her patsy, you feel his disappointment strongly.

Dan Duryea was one of the great heavies. He has a menacing presence even in this role, where he is more a victim than a villain.  Mary Beth Hughes is probably too soft a presence to be a true film noir femme fatale, though her cutie looks at least explains why men have themselves falling all over her.  Still, she manages to hold her own against two of the strongest male villains of the era.

The film came out about eight months after Double Indemnity, the landmark of film noir, and probably was influenced by it, since the producer -- W. Lee Wilder -- was the brother of Billy Wilder. Since it was released by Republic Pictures, a poverty row studio, it was quickly forgotten, especially since it did not get particularly good reviews.**** Anthony Mann later developed into a respected director of westerns and film noir.

The film deserves more recognition, especially for von Stroheim's portrayal of Flamarion.  It's a worthy entry in the film noir genre.

**His act has him showing up, presumably as the wronged husband, at a tryst between a woman and a man, and using that to shoot at them -- missing them, of course.

***He was especially good as the German commander in La Grand Illusion, and is probably best known to modern-day audiences as Max von Mayerling in Sunset Boulevard, where he played a parody of his own image.

****The New York Times of the era hated it, but I suspect they were not yet attuned to this new film noir sensibility.