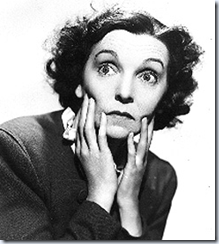 In the early 1960s, our local TV station ran reruns of The Gale Storm Show* in the afternoons.  The show starred Gale Storm as a wacky social director on a cruise ship.  Her best friend was Nugie, the ship's manicurist who had a delightfully warbly voice and superb comic timing of every line.  It was my introduction to ZaSu Pitts.

Pitts was born in Kansas around 1900.**  Her unique name was no stage affectation:  she was named for two aunts, EliZa and Susan***.  She moved to Hollywood and started appearing in silent films in 1917, generally comedies.

Her big break came when Erich von Stroheim chose her to play Trina in his legendary production of Greed. Pitts had been generally cast in comic roles; this one was fiercely dramatic.  Trina starts out as Mac McTeague's loving wife, but, after winning the lottery, becomes obsessed with money and more and more miserly, leading to a tragic end.  It is a tremendous performance.

However, the movie's problems**** meant it did little to make her a star.  She returned to comic roles, and it kept her working until sound came in, where her voice was perfect for the character she created:  a somewhat flustered and timid woman, punctuated by vague gestures and a voice that fluttered like a butterfly.

She was tagged in 1931 to star in a series of short subjects with Thelma Todd, but quit in 1933, leaving the Roach Studio for better pastures.  She was a popular supporting player of the 30s.  One director said she ended up on the cutting room floor more than any other actress, since her gestures and expressions tended to upstage the other actors.  Here she holds her own against on of the greats of film comedy:

Her mannerisms and voice were so familiar to moviegoers of the 30s that Mae Questel imitated her when she created the voice of Olive Oyl in Popeye cartoons.

While she never had a real breakthrough role, she enlivened dozens of movies in her career.  Once TV came along, she continued to work regularly, and her role as in The Gale Storm Show was one of the highlights of the show.  In the late 1950s, she developed cancer, but continued to work up until her death in 1963.  Her last appearance was in It's a Mad, Mad, Mad, Mad World.

Even after her death, she had some influence, mostly on account of her name.  There is something about "ZaSu Pitts" that's almost inherently funny when you say it (no matter how you pronounce "ZaSu"), and it is still used from time to time for comic effect.

***The name was pronounced a variety of ways.  "Zah-zoo" was most common, though "Zay Soo" was often used in films.  Pitts said the correct pronunciation was "Say Zoo."

****For newcomers, the original movie ran ten hours and was the most costly film of its time.  Von Stroheim cut it down to eight -- suggesting it be shown in two parts.  MGM refused to accept, so he cut it down to four hours, at which point MGM took it away from him and cut it down to a manageable two-and-a-half hours.  But many characters and subplots were cut out,making hard to follow.  The cut footage was eventually burned, though there have been attempts to create the entire film using still photos.

Email ThisBlogThis!Share to TwitterShare to FacebookShare to Pinterest
Labels: Actors