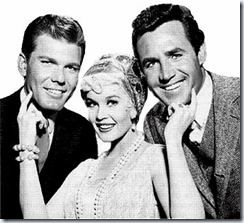 Warner Brothers studios was one of the first to embrace television.  Hollywood felt TV would steal their audience, and even tried to keep their actors from working with it.  But Warner Brothers saw the wave of the future, and started producing series for ABC, starting with Warner Brothers Presents* in 1955.  One of the last of this wave was The Roaring 20s.

The idea of setting a show in the 1920s had been wildly successful with Warner/ABC's The Untouchables,  so they tried again.  The show followed a couple of reporters, Pat Garrison (Donald May) and Scott Norris (Rex Reason) as they investigated crimes.  The shows would alternate focus on the two stars -- they would appear in all episodes, but one would focus on Pat and the next would focus on Scott.**  Warner Brothers was able to use stock footage from their old gangster films to liven up proceedings.

The reporters always found a way to drop by the Charleston Club, where Pinky Pinkham (Dorothy Provine) was their lead attraction, usually doing a musical number and occasionally helping out Pat and Scott.

Provine turned into a star.  She sang songs from the era (give or take) with an enthusiasm that told you she was enjoying performing in front of you.  For most people, she was the reason to watch the show and she was able to record an album of songs from it that had a couple of minor hits in the UK.

After the first season, Rex Reason left the show and was replaced by John Denher as Duke Williams, a character I remember far more than any of the other male leads.  I think what I liked was an early one where he wrote an almost poetic description of Gertrude Ederle's*** tickertape parade down Broadway in the rain.  Trouble was, it wasn't raining in New York -- it was raining at the track where Williams had gone to play the horses.

Of special note was that film great Robert Altman directed nine episodes, one of many TV shows where he honed his craft.

The show ran for two seasons under stiff competition until it was finally canceled.  Provine was expected to become a major star, and did move on to movie leads, but never made a big impression.  Her problem, I think, was that though she was great in her ability to sell a song, she was not really an actress.  She eventually retired from acting in 1969, and seemed happy to have left.

_____________________________________________
*An early example of a rotating series.  The episodes of Cheyenne were a big hit, and led to a series of Warner westerns like Maverick, Colt .45, Bronco, Lawman and Sugarfoot. WB also did detective series in somewhat exotic locations, like 77 Sunset Strip (Hollywood), Surfside Six (Miami Beach), Bourbon Street Beat (New Orleans), and Hawaiian Eye. The other studio that embraced TV was Disney, who used the money from their Disneyland show on ABC to build an amusement park.

**A fairly common practice in the 50s.  With 39 episodes a year, it was often hard on an actor to be in every scene in every show.  In addition, this allowed for multiple shows to be filmed simultaneously on different sets, cutting production time.

Hi Chuck, any chance you have copies of The Roaring 20s? I was a writer on the show and have been trying to track down a copy! Thanks so much for your help and great article!