The woman is furious.  She's attacking a well-dressed man, screaming at him and pummeling him with her purse and a shoe.  In the battle, the man grabs for her hair; it comes off in his hand, revealing she's completely bald.  That doesn't slow her, as she attacks the man until he's lying on the floor, helpless.  Then she goes for his wallet, taking $75 and telling him she's only taking what he owes her, then tosses the rest back to him, kicking him in the side for good measure.  The woman goes to a mirror and starts to put her wig back on.

That's when the credits for The Naked Kiss begin.

As is obvious, this isn't a sedate and subtle movie.  Director Sam Fuller is praised as a great "primitive" director, meaning he dealt with pulp fiction plots and characters with energy and a brutal style. And there's more than enough of that in The Naked Kiss. 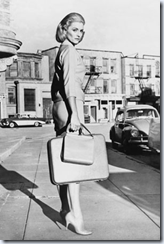 The scene switches to three years later the small town of Grantville, where the woman (Constance Towers), now a  blonde and with her own hair, shows up on the bus. Her name is Kelly, and she's a hooker.  There's no beating around the bush about this:  it's said right out, and one of the first things she does is take the sheriff (Anthony Eisley) as a john.  He tells her that she should go to join Candy (Virginia Grey) and her "bon bons" -- a bordello -- across the river in the next state.

But Kelly stays, something happens and she decides to straighten out her life.  She gets a job at a local hospital, helping handicapped children and tries to leave her old life behind, attracting the attention of the J.L. Grant (Michael Dante), the son of one of town's richest citizens.

Of course, it doesn't work out as a fairy tale.

The film surprises with its blunt treatment of things like prostitution, bordellos, abortion, and even pedophilia.  This was in the early 60s, when film censorship was on its way out, but was still a force.  It's amazing to see these subjects being treated forthrightly*.

Constance Towers plays Kelly as a tough girl who, of course, has a softer side.  She made quite a few movies, but was more successful in theater, where she played Anna opposite Yul Brynner in a 1977 revival of The King and I and she seems to still be acting in soaps today.

Eisley is a bit hard to follow as the sheriff, since the part requires change his feelings about Kelly every few minutes.  Dante is good as the rich man who truly loves Kelly -- but has a secret himself.

Fuller continued with his career through the 90s, working both in film and TV.  His stock has risen over the years, so much so that Criterion has added this film to its collection of notable films on DVD.

Posted by Chuck Rothman at 7:51 PM

This movie is going on my netflix list. I always thought the Angie Dickinson Lee Marvin fight scene in Point Blank was the best but this one might be better.