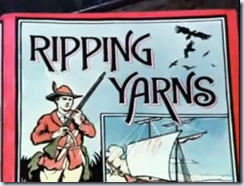 (1976-1979)
Written by Michael Palin and Terry Jones
Starring Michael Palin
IMDB Entry
Monty Python's Flying Circus was the greatest run of sustained comic brilliance in television history.  But all good things had to come to an end* and the six main performers ended up going their separate ways. John Cleese struck pay dirt immediately with Fawlty Towers, another comic landmark.  Michael Palin and Terry Jones did nearly as well with Ripping Yarns,** a show that's clearly overlooked.
It may have been the concept.  Ripping Yarns was a send up of the British boys' adventure novels (and other genres) of the 1920s and 30s, with derring do and British upper class locales (generally).  Palin and Jones used these stories -- which certainly looked very silly when they were writing it -- and turned them into wild humor.
Palin played the lead actor in all of them; Jones appeared once or twice, but pretty much stuck to writing. The episodes were filmed, not videotaped, and the stories took their genre and added many pythonesque absurdities.  There were six in the first season:
The episodes did well enough that three more were commissioned the next year:
Palin was, to my mind, the funniest of the Pythons, mostly because he was able to play the silliest of roles with an earnest manner.  He was assisted by top-notch BBC talent.
The show was expensive to produce, so after nine episodes, the BBC canceled it.  But while Fawlty Towers became a favorite in reruns, Ripping Yarns got very little play in the US.  I'm not sure why.  It had only nine episodes, but Fawlty Towers only had 12.  It's possible that the references of the parodies just didn't go over well in the US.
Michael Palin moved on, appearing in the underrated The Missionary and eventually finding his niche doing travel series.  Terry Jones started writing children's stories.  And, of course, Monty Python continues to be the gold standard for comedy.
But Ripping Yarns also deserves its place among the greats.
_______________________________________________
*And, to be honest, the final season of the show -- without John Cleese -- was very uneven and often very unfunny.  Yes, I'm looking at you, Mr. Neutron.
**Eric Idle took a long time to find his niche, but eventually developed Spamalot for the stage and has been successful as a standup comedian.
***This actually was supposed to be a one-time special, but the BBC liked it so much they ordered more episodes.
****The ending is a neat dig at our passion for celebrities;  one of the jokes is that the same dull monologues that drove Eric's acquaintances to run away to avoid mind-numbing boredom are not interested once he becomes famous.
Posted by Chuck Rothman at 7:49 PM

I have this on DVD. Bought it a couple of years ago. I clearly remember watching it the first time it was shown and discussing it with my friends in school the following day! :-)

Another overlooked series from ex-Pythons (insert Parrot Sketch joke here if you like!) is this:

BTW, I loaned my Ripping Yarns DVD set to a young colleague and he almost immediately rushed out to buy his own copy! I like to spread the word. :-)

It's especially funny if you grew up in Yorkshire, or happen to know someone who did. Palin was born in Sheffield, so he threw in a bunch of Yorkshire things that sort of fly under the radar for the rest of us. I married a York boy, so he explained all the in-jokes, and the show was even funnier as a result :)