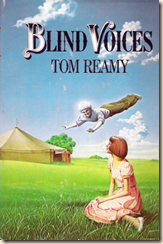 Tom Reamy could have been one of the great writers in the science fiction genre.  The only thing that stopped him was his heart.

Reamy grew up in Texas, and by the 1950s had become one of the big names in science fiction fandom.  You have to understand that a fan back then didn't just mean you read everything and had favorite books.  It also meant you were involved in writing SF 'zines* and running conventions.  He organized the first SF convention in the state and worked on Worldcon bid committees.

But he also was interested in writing.  He helped set up the Turkey City Writers Workshop,** one of the most successful writing groups in the genre.

Finally, in the early 70s, Reamy decided he was ready to break in as an author.  And did he break in.  One of his first stories, "Twilla," was nominated for a Hugo Award. The next year, his story "San Diego Lightfoot Sue" also got a nomination, and won the Nebula Award.  In 1976, he won the John F. Campbell Award for best new writer.

Obviously, he looked like he had a great future.  But, on November 4, 1977, Reamy was found dead of a heart attack.  He had been working on a story when he died.

There was one last treat for his fans, though.  Reamy had completed a novel, Blind Voices. It was published the next year.

Blind Voices is set in Kansas in the 1920s.  Haverstock's Traveling Curiosus and Wondershow comes into town, promising more than just the usual circus performers.  Three young women -- Francine, Rose, and Evelyn -- are attracted to the show and its denizens -- a centaur, and man who's only a foot tall, and Angel, the Boy Who Can Fly.

It is a story of wonders, with a subtext of sexual awakening in a time when sex was still a taboo subject.

The story immediately drew comparisons to Ray Bradbury and and Charles G. Finney's The Circus of Dr. Lao for its lyricism and setting.  Critics agreed it showed all the signs of a major talent, even if some things were a bit rough.*** It was nominated for both a Nebula and a Hugo, losing both to Vonda McIntyre's Dreamsnake.

Of course, despite his success, there would be no more Tom Reamy stories.  His short stories were collected in San Diego Lightfoot Sue and Other Stories in 1979.****

With his slim output, Reamy is easy to miss.  But Blind Voices is a book that shouldn't be overlooked.

*In those days, created on a mimeograph or hectograph and mailed out to others.  Reamy got two Hugo nominations for his fanzine Trumpet.

**Which, years later, created the Turkey City Lexicon, a must for anyone seriously interested in writing SF.

***It seems to me that Reamy's death prevented some minor edits, notably not fixing the fact that one of the character's fates is left unresolved.

****One final story was sold to Harlan Ellison's The Last Dangerous Visions (before that became a punchline) and is still unpublished.