Murder at the Baskervilles 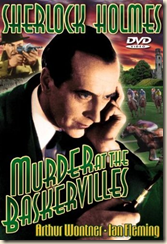 (1937)
Directed by Thomas Bentley
Adapted by A. Fowler Mear from the story by Arthur Conan Doyle
Starring Arthur Wontner, Ian Fleming, Lyn Harding, John Turnbull, Lawrence Grossmith.
IMDB Entry
Watch Online
I've always been a fan of the Sherlock Holmes stories. Holmes is more than the greatest of all detectives; he's the embodiment of pure intellect whose ability to solve complicated puzzles had made him one of the best-known names in literature.*  And there have been hundreds of films featuring the character.**
Not many of them are any good.  And, up until the Jeremy Brett BBC series, even fewer were faithful.***
You expect that.  So when I picked up Murder at the Baskervilles in a DVD boxed set, I assumed it was going to play fast and loose with the canon. The Baskervilles only appeared with their hound, so I figured this would be made up out of the whole cloth.
And the start of the time made me think I was right.  It showed Moriarty**** (Lyn Harding) plotting to kills Holmes (Arthur Wontne) and luring him to the Baskerville estate.
Once Holmes and Watson (Ian Fleming*****) reach the estate, I suddenly noticed a change.  The name "Silver Blaze" is mentioned, and the film turned into a very faithful adaptation of one of the best Holmes stories, "The Adventure of Silver Blaze."§
The middle third of the film follows the story almost scene by scene and does it pretty well. Then, in the final section, Moriarty shows up to plot against Holmes. 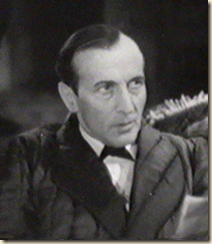 When the film was made, Arthur Wontner had already made four other films as Holmes and was considered (in England, at least) as the premier actor in the part.  Conan Doyle thought he looked exactly the way he imagined Holmes to be, and he did bear a strong resemblance to the illustrations for the stories. He played Holmes just as the books indicated:  smart, with little patience for social graces, but with the usual sly humor.
A British production, the film took a couple of years to be shown in the US and was retitled to take advantage of the fame of the Basil Rathbone Hound of the Baskervilles (it is technically a sequel). But Rathbone had become the "definitive" Holmes§§ and Wontner was forgotten. The film -- which probably wasn't a big hit -- was forgotten and passed into the public domain.
The good thing is that you can watch it online.  If you're a Holmes buff, I'd recommend it (or, at least the middle section) to see how a story can be brought to life successfully.
_________________________________________________
*Harlan Ellison once wrote that there are four literary characters that are know throughout the world, even in countries where English is not spoken:  Holmes, Tarzan, Superman, and Mickey Mouse.
**The IMDB lists 224, including TV shows.
***Not that being unfaithful to the material is necessarily bad.  The recent Robert Downy, Jr., Sherlock Holmes, put faithfulness in a blender and redid things as they saw fit (geography, too, -- they managed to travel from the House of Parliament to Tower Bridge through secret tunnels in about 30 seconds, when the two landmarks are two miles apart).  But it's a very entertaining film.
****Moriarty always shows up in Holmes films, probably one reason they so often leave the canon behind.  Despite being Holmes's archenemy, he only appears in one story, "The Adventure of the Final Problem," mostly because Doyle needed an archenemy who might be a real threat to him.  He's mentioned in "The Adventure of the Empty House" -- a necessity, for Holmes has to explain how he didn't die -- and not again.  It similar to Irene Adler, who only appeared in the first Holmes short story, "A Scandal in Bohemia," but who always shows up as a love interest.
*****No, not the guy who created James Bond.
§ Best known for the exchange:
Gregory (detective): "Is there any other point to which you would wish to draw my attention?"
Holmes: "To the curious incident of the dog in the night-time."
Gregory: "The dog did nothing in the night-time."
Holmes: "That was the curious incident."
The film was also released in the UK under the title Silver Blaze
§§ For a while.  Now it's more likely to be Jeremy Brett.
Posted by Chuck Rothman at 4:01 PM

We Holmes fans will read and watch any and everything to do with our hero. I look forward to catching this online. Thanks for the heads up.