Night of the Generals 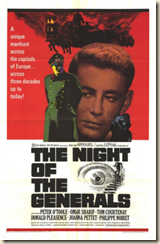 The Night of the Generals has a terrific start. A prostitute in Nazi-occupied Warsaw in 1942 is brutally murdered. There is one witness: a terrified Pole who has only seen one thing:  the killer's pants leg as he walked down stairs.  Not much to go on, except that the let had a red stripe down it: the sign of a German general.

The movie starts out as a mystery, but quickly moves on to something much different. Major Grau (Omar Sharif) believes the story -- because the witness would be a fool to lie about something like that. It turns out that there are three German generals in Warsaw whose whereabouts are unknown at the time of the murder:  General Tanz (Peter O'Toole), General Kahlenberg (Donald Pleasance), and General von Seyditz-Gabler (Charles Gray).

Despite the discouragement of his superiors, Grau looks into the case. The generals, of course, have to be handled delicately, but Grau -- who believes in justice, even for prostitutes -- plays a neat game of cat and mouse to try to find out who might be responsible.

The identity of the killer is made apparent early on, and I think a look at the cast list would give it away.*  But I'll observe the etiquette of spoilers and not do it here.  But the film shows how the killer is unbalanced and just this side of mad (including his being affected by the famous self-portrait of Vincent van Gogh).  He cannot control his urges, but is clever enough to cover up the results.

The main point of the film is watching Grau closing in on the killer.  He is a man who believes in justice, even when it cuts across the class lines between a prostitute and a German general.  At the same time, he is only a Major and, in the stratified world of the German army, it makes his job all the more difficult. When he begins to get too close to the killer, he is promoted and transferred to Paris -- a dream for most German officers, but a disappointment for Grau.

However, eventually, the other generals are also transferred to Paris, and the investigation continues.  His dedication gains the admiration of Inspector Morand (Philip Noiret) of the French police, who, despite being a member of the underground, still sees that Grau is an honorable man. The plot dovetails nicely with the history of the period and has some very surprising twists to make up for learning the killer early on.

This is one of Sharif's best roles.  His Grau is smart, ironic, and well aware of the difficulties he faces. Peter O'Toole is always excellent and the rest of the actors make the best of their roles.

Director Anatole Litvak had had a long and successful career when he made this films, usually psychological dramas like Sorry, Wrong Number; The Snake Pit, and Anastasia.  He shows this background, as well as his background in early gangster films, to good use. This was Litvak's next to last film, and one of his best.

This film's based on a novel by Hans Helmut-Kirst who also wrote the terrific Fox of Maulan - well worth seeking out.