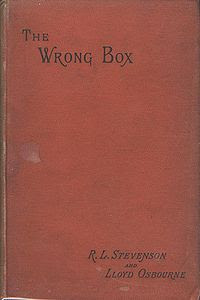 Comedy doesn't travel well, either over time and distance.   At best you can appreciate the humor, but usually it still doesn't make you laugh out loud. That's one reason why The Wrong Box is such a delight.

The book is based upon the financial plan that probably was the basis of more fiction than any other:  the tontine. This was basically a life insurance plan where a group of people put money up in an investment. The last person left alive got all the money.* Mystery writers loved the concept, because it gave a greedy investor a motive to murder the others.**

I admit I was expecting this to be the major point of the book, but discovered it hadn't been structured that way. In it, the Finsbury brothers -- Masterman and Joseph -- are the last two surviving members of a tontine.  Masterman is in seclusion, cared fro his son Michael, a lawyer.  Joseph is still hard at work in his failing leather business, a figurehead for his two sons Morris and John.  Morris needs some extra money, and comes to the conclusion that his uncle has died, and the fact concealed by Michael, keeping Morris from the money that's rightfully his.

When Morris and John take their father out, they are caught in a terrible train collision. They find a man in Joseph's coat, his face horribly mangled, and realize they must keep this a secret or lose any chance at the tontine money.  Ultimately, they put the corpse into a barrel and ship it back to London.  But the barrel goes astray.

Meanwhile Joseph, who you've probably guessed is not dead, is glad to be out from under the control of his sons, sets out for a life of his own. Joseph is hilarious literary character -- a know-it-all bore who lectures anyone within earshot about his own philosophy and life.  Here's a favorite passage of mine:

'I have examined all the theatres in London,' he [Joseph] was saying; 'and pacing the principal entrances, I have ascertained them to be ridiculously disproportionate to the requirements of their audiences. The doors opened the wrong way—I forget at this moment which it is, but have a note of it at home; they were frequently locked during the performance, and when the auditorium was literally thronged with English people. You have probably not had my opportunities of comparing distant lands; but I can assure you this has been long ago recognized as a mark of aristocratic government. Do you suppose, in a country really self-governed, such abuses could exist? Your own intelligence, however uncultivated, tells you they could not. Take Austria, a country even possibly more enslaved than England. I have myself conversed with one of the survivors of the Ring Theatre, and though his colloquial German was not very good, I succeeded in gathering a pretty clear idea of his opinion of the case. But, what will perhaps interest you still more, here is a cutting on the subject from a Vienna newspaper, which I will now read to you, translating as I go. You can see for yourselves; it is printed in the German character.' And he held the cutting out for verification, much as a conjuror passes a trick orange along the front bench.

But all the characters are wonderful.  There's the fretful Morris, trying to scheme and failing miserably; Michael, who sails blithely through life; Gideon Forsythe, the timid schoolmaster whose life is turned into chaos by the box.

The book is usually described as being "black humor," and it certainly has those element (mostly the missing corpse).  But most of the humor is from observing the characters and seeing their personalities clash when being confronted with a situation they've never had to deal with before.  Only Micheal seems to be unbothered by matters, which means, of course, is that he only makes things worse.

Stevenson, of course, is still known today for works like Treasure Island and The Strange Case of Dr. Jekyll and Mr. Hyde. His hand at comedy is surprisingly sure for someone best known for more dramatic work.  Osborne was his son-in-law and wrote the first draft, though Stevenson actively revised it. A movie was made in the book, but the casting just doesn't seem right.  Peter Cook, for all his brilliance, is just not Morris, and the plot changes quite a bit from the book. Since the original is available free, you should go to the book if you can.

In addition to recommending the book, I want to recommend the Audiovox recording I've linked to.  The reader, Andy Minter, truly brings the book to life, using different accents and styles for each character and turning it more into a radio play than an audiobook. If you like to listen while you commute, this is the way to go.

*It looks like in an actual tontine, all living investors got dividends over their lifetimes, the amount increasing as the others died off.  But this is rarely mentioned in the fictional version.

**Though, of course, making it all look like accidents, since the killer would be pretty obvious at the end.

Posted by Chuck Rothman at 7:36 PM

Hi, just came across your page! You might like to know about this musical version adapted from The Wrong Box (based on the book, not the movie): http://www.kitgoldstein.com/WrongBoxCD.php

Nothing Left to Lose

The CD is available on Amazon or iTunes

Thanks for the great page about The Wrong Box!

It was also made into a very, very, funny movie.