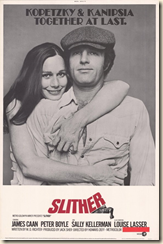 I've mentioned elsewhere that I'm a fan of director Howard Zieff. Nearly forgotten today, and with a movie career that was much too short, Zieff came on the scene with a love for quirky characters and situations. He first made his mark doing commercials -- both TV and print -- and started a trend to use unusual-looking people instead of the perfect hair and teeth models advertising has used previously.*

Slither was his first film. It's the story of ex-con David Kanipsia, who is having trouble adjusting to life on the outside.  He meets with his ex-cellmate Harry Moss (Richard B. Shull), who is shot while David watches.  Dying, he tells David of $300,000 that he had embezzled with his partner Barry Fenaka* (Peter Boyle) that's David's for the taking.  David then runs into Kitty Kopetzke (Sally Kellerman), who offers him a lift, with a short stop to rob a diner. They find Fenaka and his wife Mary (Louise Lasser), and then head off in Fenaka's RV to find Vincent J. Palmer (Alan Garfield), who has the money for safekeeping.  But soon they are followed by three sinister black RVs, whose intentions are unclear.

The plot is convoluted, but ultimately unimportant.  What makes the film work are series of oddball setpieces -- in a bingo hall, at a vegetable stand, a sales pitch for RVs -- all of which are funny in a low-key way.

The cast is made up of some charming actors.  Caan, fresh from his breakthrough role in The Godfather, gives a fine performance as an absurdist version of Hitchcock's "running man" heroes.  Kellerman puts in her best performance next to M*A*S*H, and, of course Boyle, Lasser, Garfield, and Shull are always delightful to see on the screen.  There's also a fine cast of supporting actors.  Like in his commercials, Zieff loved to film an interesting face, and he fills the movie with them.

The film did well enough to give Zieff a solid start to his career. *** He followed it with the delightful Hearts of the West as well as movies like House Calls, The Main Event, Private Benjaman, and My Girl.  Sadly, he had to retire from filmmaking after doing My Girl 2 in 1994 after developing Parkinson's Disease.  He died in January of 2009.

*His best-known commercial of the time was the brilliant "Spicy meatball" Alka Seltzer commercial as well as their "No Matter What Shape You're Stomach's In," which spawned a hit single.

**The IMDB has "Barry Fenaka," but the original New York Times revies lists it as "Henry Fenaka."  You make the call.

***There was even a short-lived TV show.

Posted by Chuck Rothman at 6:45 PM