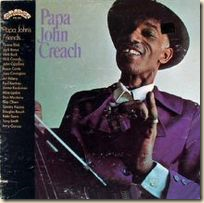 Papa John Creach was an very unlikely rock star and his path to success was unusual, to say the least.

Creach was born in 1917, making him a bit old when rock came into being. And he really wasn't a blues musician, though he did play blues, too.  He played on an instrument -- violin -- that one hardly associates with either genre* and, indeed, one gets the impression he played in bars and ballrooms in the 40s and 50s.  He probably would have stayed that way if drummer Joey Covington hadn't stumbled upon him working.  Covington was a friend (and soon to be drummer) of the Jefferson Airplane, and he soon introduced them to the band.  Creach started playing with Hot Tuna** and soon with the Airplane themselves.  He was an immediate crowd favorite.

Back in 1971, the Airplane, like many big name groups of the time, had their own record label (Grunt)*** and decided to feature Creach on an album.

The record featured a lot of San Francisco's top musicians, members of the Airplane, Quicksilver Messenger Service, Santana, and the ubiquitous Tower of Power horn section.****  Clearly, people just enjoyed playing with Creach, and it's clear he enjoyed the music more than anyone.

The songs are a mix of the old ("St. Louis Blues" and lovely versions of "Over the Rainbow" and "Danny Boy"), songs composed by his friends (Joey Covington wrote "The Janitor Drove a Cadillac"), and some of Papa John's own compositions.  It's charming, filled with blues, jazz, standards, rock, and all sorts of musical styles.

The album was the peak of his solo career, but he kept working with all the various incarnations of the Jefferson Airplane/Starship**** and Hot Tuna.

Papa John died in 1994, after a long life of spreading joy through music.

*Though violins in rock don't get the respect they deserve, especially with musicians like Richard Greene (Seatrain), Don "Sugarcane" Harris (The Mothers, after making a name for himself as a guitarist and singer in the 50s) and David LaFlamme (It's a Beautiful Day)

**A side project by Airplane guitarist and bassist Jorma Kaukonen and Jack Cassady.

***It started with Frank Sinatra with Reprise, but others who had labels at the time were the Beatles (Apple, of course), The Rolling Stones (Rolling Stones), The Moody Blues (Threshold), Rare Earth (Rare Earth), Frank Zappa (two labels -- Bizarre Records and Straight Records; later he ran Barking Pumpkin Records), Led Zeppelin (Swan Song) and the Grateful Dead (Grateful Dead).  Producers like Lou Adler (Ode and Ode 70) and Neil Bogart (Casablanca) also had boutique labels, though they were more involved in developing talent for them.  Except for the Grateful Dead, all were distributed by established record companies.

****Whenever you wanted horns on your record, you hired Tower of Power.

*****Though he had left by the time they recorded "We Built This City."

10/9/11
RobGems.ca wrote:
The Grateful Dead did have United Artists very briefly distribute their botique record label from 1975-76. The releases included singles like "Franklin Tower", and albums like "Steal Your Face". U-A also briefly distributed their 2nd label, Round Records, which handled non-Grateful Dead projects (such as Jerry Garcia's solo album "Reflections"). The deal with U-A collapsed in 1976, and the band then signed with Arista Records shortly thereafter.

I just found you when I searched for Papa John Creach. I had taken a 2-disc set of Airplane/Starship out of the library and hsve loved listening to "Lather," "Good Shepherd" and most especially, "Pretty As You Feel." I've listened to PAYF several times and suddenly, it hit me -- Papa John Creach. We used to listen to his music back in the day, I went to prep school in Chicago and all the greats were playing locally then.
He was such a gifted musician and I'm happy that you honored him in 2009.

I'm on blogger as well, NATURE IS MY ELIXIR is my blog and I have an eclectic and wide ranging taste in music and hate to see the greats going, most recently Spirit's drummer. Loved seeing Led Zeppelin honored at Kennedy Center Awards but never thought Jimmy Page would look better in his old age than Robert Plant.

We're not getting any younger. Yikes, what's happening. I wish it was science fiction.