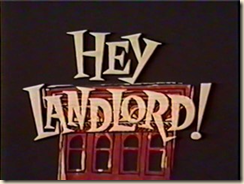 Some TV shows seem to really vanish. They don't have a long enough run to go into syndication, and they never got any particular notice. Even in the Internet age, you can find only sketchy information. And in the case of Hey, Landlord, that's a shame.

The show was the first one produced by Garry Marshall.  He and another ex-Dick Van Dyck Show  writer, Jerry Belson, branched off to develop it for NBC.

The premise was certainly a good one.  Ohioan Woody Banner (Will Hutchens) inherits a New York brownstone and goes to live there. He shares his own apartment with aspiring comedian Chuck Hookstratten (Sandy Baron), and has to deal with the foibles of the tenants.  These include photographer Jack Ellenhorn (Michael Constantine), aspiring model Timothy Morgan (Pamela Rogers) and her roommate Kyoko Mitsui (Miko Miyama), plus Mrs. Henderson (Ann Morgan Guilbert), and Mrs. Tecker (Katryn Minner).

Woody was the fish out of water, unused to the quicker pace of the Big Apple, while Chuck tried to guide him away from the worst of the pitfalls.  Jack was always morose about life and of course, Tim (real name Teresa) was there as a potential love interest.

The show succeeded on the charm of Will Hutchens.  Hutchens was attempting something of a comeback: he had been the star of the ABC TV series Sugarfoot for several years and was switching to comedy.* But my favorite was Sandy Baron.  First of all, it was great to see someone on TV named "Chuck." And Baron was a very funny guy -- a standup Borscht Belt comedian moving into sitcoms.

Michael Constantine was also terrific as the morose Jack Ellenhorn.  If you remember him from Room 222, his role in this show was very similar, though far less watered down.  And, of course, Ann Morgan Guilbert was already a TV legend from The Dick Van Dyck Show, and continued on a long TV career.

The show was also a beginning for comedy writer James L. Brooks.

Despite good writing, a great cast, and a theoretically good time slot (between Walt Disney's Wonderful World of Color and Bonanza), Hey Landlord couldn't compete against The FBI and Ed Sullivan. It ran against the second half of both shows and thus depended on its viewers to come from the Disney audience, which probably was too young to be interested.  I'd guess that Disney viewers would catch the second half of Sullivan instead of sticking with Hey Landlord.  In any case, it only ran one season.

Hutchens tried again a couple of years later with Blondie, which also flopped, then did various guest shots before dropping out of acting. Baron was never given a chance to display his talents on TV, so returned to standup and also appeared as one of the comedians in Broadway Danny Rose and is the one narrating the movie.  And the producers and writers for the show went on to create many more TV successes.

But despite some great talent, Hey Landlord has been forgotten.

**Not that Sugarfoot was a serious western.

Posted by Chuck Rothman at 9:42 PM

"Hey, Landlord" is a great series! I wish I had all the episodes on video!

Loved "Sugarfoot", and I remember seeing "Hey, Landlord!", in the 60's as a young girl. Hutchins and Baron were both so cute, and had good chemistry. I saw Sandy Baron on Seinfeld later and he was hilarious. Wish the show had lasted, because it WAS really good. Plenty of sub par shows lasted much longer. Go figure.

I agree with you that this show is sadly a lost classic, but mainly because It had the misfortune of appearing on a bad time slot known
as Sunday Nights at 8:30 on NBC.
despite being in between two big hits (Walt Disney and Bonanza) no show in that time slot lasted more than two seasons because the show
was always beaten out by Ed Sullivan. the Time slot was also owned by Proctor and Gamble for most of the 60's.

I think the characters should return for a reunion, featuring Sally Field as Bonnie. And maybe Sally Field can make a few suggestions on so more recent shows relevant to her character and episode as Bonnie.BobTruck

I agree with Anonymous about the time slot. My family always watched NBC on Sunday nights, and the half hour between Disney and Bonanza had a lot of shows, but none of them ever lasted. The most successful in this slot was probably 'Branded' with Chuck Conners. I know it lasted at least 2 seasons.