You can't go very far wrong with a nice underdog story, and whereas the plot is most common with sports movies, sometimes, there's a different twist on it.  One result was Bottle Shock. 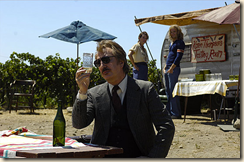 It's based (loosely) on a true story, the famous "Judgment of Paris" in 1976.  Well, famous in wine circles -- it was the first time an American wine beat French wine in a tasting. The story focuses on Steven Spurrier** (Alan Rickman) a British sommelier and owner of a Paris wine shop, who needs some publicity to get people into his store. He concocts the idea of a blind testing of Napa Valley wines versus the best France has to offer and flies out to California to find candidates.

Meanwhile, Jim Barrett (Bill Pullman) is working diligently to make great wine and wishing his son Bo (Chris Pine) took a more serious interest in the business.  Bo is more interesting in good times and pot, but starts to take more interest when Sam (Rachel Taylor) shows up at the vineyard as an intern.

Spurrier shows up looking for wine.  Barrett isn't interested, put off by Spurrier's superior attitude.  He's also a man at the end of his rope, for though he's been working at it, he is still working on making the wine to meet his standards.

This isn't a film with surprises; you know from the start how the contest will end up.  What makes it work are the characters and also the trials and tribulations everyone goes through to get the judgment.

The cast seemed to enjoy their roles.  No one does a superior sneer better than Rickman, and Pullman has a nice earnestness that makes you want him to succeed. Chris Pine shows the same devil-may-care attitude that got him cast as James T. Kirk in the Star Trek remake.

Some of the other bigger names -- Dushku, Whitford, and Farina -- are really nothing more than just cameos, lending their names to help out the projects.  They handle their scenes well, but the main story is in the hands of lesser-known actors.

The film did fairly modest business, probably on the art film circuit. But it's an entertaining (if not inspiring) little movie with nice characters and a lot of heart.

*Just a bit part, but Middleman fans will recognize her as Ida.
**No, not that Steven Spurrier, sports fans.