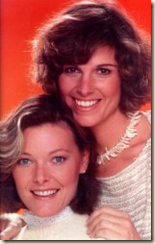 It's rare that a relatively recent TV show that was both a critical and ratings success could be considered forgotten, but that's exactly what happened to Kate and Allie.

The show's premise certainly didn't stand out all that much.  In it, Allie Lowell (Jane Curtin) and her two kids, Emma (Ari Meyers) and Chip (Frederick Kohler), move to New York to share an apartment with Allie's childhood friend Kate McArdle (Susan St. James) and her daughter Jenny (Allison Smith)decide to share an apartment after the two of them divorce.  Kate was a stay-at-home mother who needed to learn how to be more independent, while Allie had a job and had trouble trying to be taken seriously in the workplace.

Though the premise seems routine now, it was still unusual to have to independent women characters in a sitcom. But what made the show work was the quality of the writing and the scripts. In a fairly low-key way, they dealt with many social issues -- not only the role of women in society, but other issues like homelessness and what makes a family.

The latter was the basis for the episode I remember the best, where Kate and Allie were threatened with a big rate increase because they weren't a family. They pretended to be a lesbian couple,* claiming that to be a family, too, which backfired when they discovered their landladies were a lesbian couple.  But instead of letting hijinks ensue, Kate and Allie told that this was only a ploy, and that they were a family nonetheless.

The show was successful not because of the social issues, but because it was very funny. It wasn't the usual sitcom putdown comedy, but often contained conversations that revealed the characters while making you laugh. It reached the top ten in its first season and kept in the top 20 through most of its run.

Alas, the show jumped the shark at the end of its next to last season. Throughout the run, Allie was learning to be stronger and more independent, and in the final episode, she remarried.  She was going to be more of an equal than how she was in her first marriage, but the entire premise of the series was betrayed.  The final season did poorly in the ratings and the show was canceled.

Despite winning several Emmys for Jane Curtin, the show seems to have vanished off the map.  Maybe it shows that the concerns of the 80s have become a bit dated, but the show is certainly still funny after all these years.

*Reports have it that CBS was concerned that people might jump to this conclusion.

Posted by Chuck Rothman at 8:11 PM