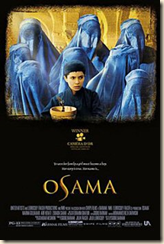 I've always had a liking for foreign films*. They often have a different point of view than US films, and I am especially interested when I start discovering films from a country that is just joining the world cinema stage.

So, when I heard about Osama, the first film from post-Taliban Afghanistan to make it to the US, I knew I wanted to check it out.  And I wasn't disappointed.

Of course, given the time frame of the film, it should be obvious that it would be about life under the Taliban. We know in the West about some of their abuses, but this brings to light things that we probably never considered.  Under the Taliban, not only were women forbidden to hold jobs, but they could not go out of their houses without a husband or male escort.

This hits a 12-year-old girl (Marina Golbahari) and her mother (Zubaida Sahar) hard.  The mother is fired from her job in a hospital. Worse, because her husband and father have been killed in fighting, they are not allowed to leave their house.  Given the rules, they would have stayed "virtuous" -- and starved to death.

Desperate, they form a plan.  The girl is to disguise herself as a boy and get a job.  It works for awhile, but she is caught up in a sweep to recruit boys as soldiers and ends up in a training camp, where she is given the nickname Osama**.  She befriends Espandi (Arif Herati) a boy in the camp and is also singled out for her zeal by one of the teachers (Khwaja Nader). 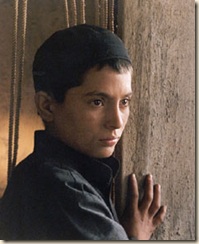 The actors in the film are uniformly excellent. They were not professionals, but were found in Kabul.  Marina Golbahari is heartbreakingly good in the title role, and Kwaja Nader is a type of movie villain rarely seen:  a gentle monster.  He seems so sweet as he also shows the dark side of religious fanaticism.

The final scene is one of the saddest in the history of film***.  Out of context, it means nothing, but as you see the entire film, you understand exactly what it means and are horrified.

The film did well enough**** and won awards all over the world, including a Golden Globe.  Director Barmak remains working in the Afghan film industry.  Golbahari has made several other films since then. Calling her a major Afghan film star may be faint praise, but it fits her.

There isn't a cheerful film and has no happy ending. But sometimes tragedy must be told, too.

*I'm not one to dogmatically state foreign films are always better than US films, but I do recognize that if a foreign language film gets to the US, it is among the best that country has to offer.  Bad foreign films never make it to America, which is why it seems like so many are critical faves.

**Given the circumstances, how could it not be?  The director did want to have a more hopeful ending, but decided that wouldn't be right.

***Yes, named after that Osama

Posted by Chuck Rothman at 5:00 PM