Television shows are rarely about history.  They are set in the present and not in any identifiable historical period.* But in some cases, someone will try, and I'll Fly Away succeeded admirably. 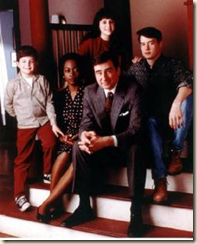 The title come from an old hymn and the show was set in the South in the late 1950s/early 1960s and dealt with the emergence of the Civil Rights movement.* It concentrates on Forrest Bedford (Sam Waterston), a widower raising three children, teenaged Nathan (Jeremy London), preteen Francie (Ashlee Bedford), and young John Morgan (John Aaron Bennett). Bedford hires a black housekeeper Lily Harper (Regina Taylor).  She is a servant in a highly segregated society, and we -- and eventually Bedford -- discovers the problems of being in that position.

The show stayed away from the melodramatic.  Sure, the Klan was mentioned, but wasn't usually part of the story. What was shown was the subtle racism of the society, and how Bedford -- a decent man who accepted racial inequality because it was all he knew -- began to see how wrong it was.  Lily, too, slowly became more and more aware that there were things she could do other than accept the status quo.

The actors were all uniformly first rate.  Waterston is the best known, of course, but this was the one show that allowed him to show just how good he was.***  But Regina Taylor is striking as Lily.  She played the role with quiet intensity and dignity, rarely raising her voice but giving the impression she was seething underneath.

Jeremy London was good as the teenage Nathan, and John Aaron Bennett was totally charming as the innocent youngster.

The show never actually named the state in which it was set, though I got the impression they meant Georgia. Brand and Falsey have said that the idea came from To Kill a Mockingbird, and there are certain similarities in Forrest Bedford and Atticus Finch.  I especially liked some of the character names.  Forrest and Nathan Bedford are obviously named after Nathan Bedford Forrest, Confederate cavalry officer and known as one of the founders of the Ku Klux Klan.**** Likewise, John Morgan was another Confederate cavalry officer.

The show ran for two seasons on NBC to acclaim (including Golden Globe and Emmy wins) and so-so ratings before being canceled.

It should have ended there.  But, like Homicide: Life on the Street, the producers managed to get the cast together***** for a two-hour special on PBS. Entitled I'll Fly Away: Then and Now, it tied up loose ends and showed Lily Harper in the present.

Sam Waterston and Jeremy London went on to become solid TV performers, Waterston on Law and Order and London on Party of Five and Ashlee Levich has worked regularly in TV.  Regina Taylor also has found a niche in TV as Molly Blaine in The Unit.  Brand and Falsey were involved deeply in Northern Exposure.

*The TV western bears no resemblance to the actual old West -- if it even existed.

**Certainly a subject for drama that's been under utilized.

***I saw him on Broadway in Lunch Hour with Gilda Radner, and he showed a fine knack for comedy, too.

**** Bedford Forrest is usually listed as a vehement racist, but the evidence is unclear.  It is based on two things.  One was the battle at Ft. Pillow in the Civil War, where his troops massacred black soldiers who had surrendered. But accounts seem to indicate he never ordered the massacre and tried vainly to stop it.  The second is the Klan. His name was indeed listed, but they may have just used his name, possibly without permission, and there's no evidence he actively took part. Finally, there was clear evidence that he had no problems with equal rights for blacks; he was the first white speaker at The Independent Order of Pole-Bearers Association, precursor to the NAACP, where, in 1875) he spoke quite movingly about equal rights for Blacks and shocked white society by giving a Black woman a kiss on the cheek.

*****Except for Jeremy London, who had other commitments.  Luckily, he had a spare:  his twin brother, Jason. Oddly enough, Jason was originally offered the part, but had to bow out due to other commitments, giving Jeremy the chance for the role.

Posted by Chuck Rothman at 8:54 PM

It was a wonderful show that ended to soon. I wonder what "Lilly" would think to see Obama as president?

Thanks for the info, this a great series. After 20 years we are watching it again on YouTube.

I never forgot this! Esp I've been to Alabama and South Carolina (

One of the great, under-rated series. Right up there with Homefront and The Call To Glory.