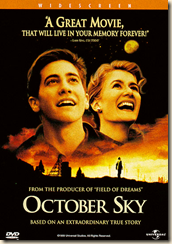 Some directors get typecast.  They make films of similar natures with similar subjects. Sometimes this is good, when you're Alfred Hitchcock or John Ford. Sometimes it is not. But what's especially interesting is when a director breaks out of the mold and makes a totally uncharacteristic film.

Joe Johnston is a case in point.  He's best known for action adventure films like The Rocketeer, Hildago, or Jurassic Park III and children's films like Honey I Shrunk the Kids, The Pagemaster, and Jumanji. But the one film that is not like the others is ultimately his best:  October Sky.

Homer Hickam (played Jake Gyllenhaal in the film) was a coal miner's son living in West Virginia in 1957, who was inspired by the Russian Sputnik launch to become involved in making his own rockets and eventually ended up working at NASA. His memoir, Rocket Boys, was adapted into the film. Hickam wanted to keep the title, but was overruled (possibly because it sounded like a sequel to Johnston's flop, The Rocketeer) and the title was changed to October Sky, referring to Sputnik's October launch. It's also an anagram of Rocket Boys.

In the film, Homer gathers together a group of friends who start launching small rockets. It becomes more than just a game as the groups experiments and learns how to make increasingly sophisticated models taking off.  With the help of a teacher, Miss Riley (Laura Dern), they get together to enter the science fair and try to win scholarships.  But Hickam's father (Chris Cooper), a coal miner, is hostile to the entire endeavor.

It's not a film with a lot of conflict, of course, and it's pretty clear how it will end up.  But the characterizations are all first-rate and you can see how the idea of rockets was so exciting. These are real people, and Homer sees the rockets as a way out of the mines, while his father sees no reason for his son to leave.

It's a quiet film, with little action and no laugh out loud humor (though the reaction to one of their stray rockets is pretty funny), but with a feeling for the time and place that is unmatched. If you want to see how Sputnik changed America, this is one place to see it.

Posted by Chuck Rothman at 8:23 PM

this is a great film. it really creates the world in which it transpires. i love the book rocket boys aka october sky + it follow ups: the coalwood way and sky of stone. thank you for your review.