Dreams of the Rarebit Fiend (Comic)

Dreams of the Rarebit Fiend probably is less funny than any humorous comic strip in history.  And that's why it's one of the greatest of all time.

Winsor McCay is one of the giants of newspaper comics, his reputation secure by Little Nemo in Slumberland, the adventures of a young boy in the land of dreams.  Each episode, he would find wonders in the dream world, only to wake up in the last panel.  The dreams often continued for weeks, taking up where he woke up the week before, filled with sumptuous imagery and striking use of color.  It's a landmark of comic book history.

But Dreams of the Rarebit Fiend is nearly as good, and is definitely overshadowed by Nemo.  It was a dry run for the other strip: each week, someone would have weird and terrible nightmares due to eating a rarebit.*

The strip -- a full page -- was funny, of course.  People (there were no recurring characters) would dream absurd dreams, only to wake up in the end. Their reactions and the reactions of the people in the dream were comically overstated:  An alligator handbag becomes a real alligator, a minister starts drinking rum by the barrel (without putting in a glass first), a hair restorer works a little too well, a man is chased by a talking moose.  A small problem in the first panel becomes a major disaster in the last one.

But what really makes the strip rise above is the nature of the dreams. McCay seems to have been working through his own nightmares and fears.  And, on second reading, you can see them:  fear of death, fear of public speaking, fear of falling, fear of sex, fear of being caught in adultery, fear of moving to Brooklyn (just wanted to see if you were reading -- it is a funny strip since it's the most understated one).  In many ways, McCay was a precursor to Freud (I don't know if Freud knew of McCay, but in his Wit and the Relation to the Unconscious, Freud reprinted a German comic that was pretty much a panel-by-panel ripoff of one of the Rarebit fiend strips**). 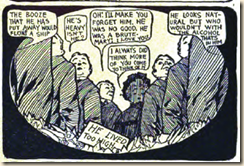 The strip only ran a short time.  Once McCay exorcized his demons, he moved on to eventually create the wonderland of Slumberland. But the strip he left behind is a fascinating and funny look into human fear.

*More properly known as Welsh rabbit, it's usually a cheese sauce with beer and various spices, served over bread or toast..  The name was a joke, alluding to the fact that the Welsh couldn't get real rabbit. At some point, someone who had no sense of humor decided it couldn't be rabbit, since it had no rabbit and decided the word was really just a corruption of "rarebit," though that construction was never really explained or even logical.

**In McCay's version, a man grew so overheated that his perspiration caused a flood; in the German version, a man's urination does exactly the same thing.  What this says about the character of German humor, I leave for the student to derive.

Posted by Chuck Rothman at 9:26 PM