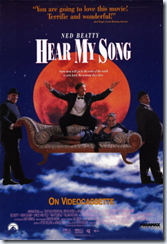 An irresistible English comedy-drama.  Adrian Dunbar plays Mickey O'Neill, a concert promoter down on his luck (with acts such as Franc Cinatra), who vows to bring the legendary Irish tenor Josef Locke (Beatty) back to England for a concert.  The catch is that Locke is a tax exile and will go to jail as soon as he set foot in the UK (and David McCallum is out to catch him after Locke made him look the fool).

First, O'Neill tries a scam, but, when that falls apart, he is off to Ireland to track down Locke and win the heart of Nancy Doyle, played by Tara Fitzgerald.  Fitzgerald is just a radiant actress.  I'm reminded of the description in a Theodore Sturgeon story I read, about how a woman in it looked ordinary until she smiled -- and they you would do anything to see her smile again.  Tara Fitzgerald's smile is like that.  She has had several impressive roles in a couple of films I plan to write about (Brassed Off and The Englishman Who Went Up a Hill and Came Down a Mountain), and is best known in the US for her role in Sirens, but she doesn't like Hollywood, and her work stayed on the UK side of the ocean.

Of course, finding Locke is only the beginning:  how can they give the concert without McCallum catching him?

Ned Beatty is billed as the star of the film, but it's really more a supporting role.  It's also one of his best.

The movie is a small triumph.  Chelsom never made much of a splash afterwards (though his Shall We Dance is badly underrated).  But in this film, he had created a real gem.