Jean de Florette/Manon of the Spring 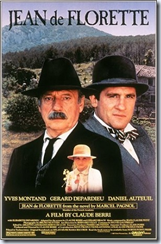 People misunderstand tragedy.  They think it involved something bad (like death) happening to the main characters at the end of the film.  But true tragedy, involves a character who is fatally flawed.  The death at the end becomes inevitable due to the character's own problems.

Jean de Florette/Manon of the Spring (Manon des Sources) is tragedy on the grand scale.  It is really one movie, telling one story in two parts, and moves along to a tragic conclusion that makes you see the characters differently.

Cesar (Yves Montand) and his nephew Ugolin (Daniel Auteuil) are farmers in rural France.  Auteuil concocts a plan to raise carnations.  But carnations need a lot of water, and the nearest source is on the land adjoining theirs.  Before they can buy the land, it is sold to hunchbacked Jean de Florette (Gerard Depardieu*) along with his wife and young daughter, Manon.  So Cesar, who don't see how a hunchback can run a farm, dams up the spring, hoping to discourage Jean and buy the land cheap from him.  But Jean is not one to become discouraged by anything.

Depardieu, as usual, is a marvel; his Jean is a man who is willing to work as hard as possible to get the farm to work, taking on the Sisyphean  task of carrying the water he need to survive.

I can't really discuss Manon of the Spring without spoiling Jean de Florette.  It continues the story several years later, and leads to a conclusion that resonates across both films.  I'd suggest renting Jean the Florette and not even look at the box for Manon until after you've seen it.

(I will say that Emmanuelle Béart is wonderful at Manon, Jean's daughter.)

Not a cheery film, of course.  But if you're in a mood for tragedy at its best, well worth the time to watch.