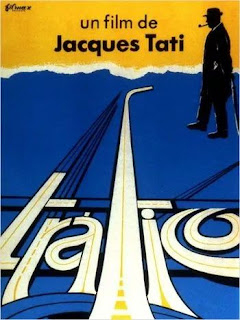 Readers of this blog may have noticed my liking for Jacques Tati (especially likely). I decided to take the time to watch his final film Trafic, again. I remember being disappointed, but maybe a rewatch would change my mind.

The story is simple.  M. Hulot (Tati, or course) is a designer of a new type of camper car, which he plans to unveil at the Amsterdam auto show. It's loaded on the truck for the journey, with a driver (Marcel Fraval) driving. Maria, a publicist for the auto company (Maria Kimberly) is also involved in getting the car to be displayed.

The movie has the thinnest of plots -- which is typical of Tati. He always depended on gags to carry the story, and a specific type of gag where it is the reactions of the characters that are the basis of humor. For instance, when there is the inevitable car crash, the section -- one of the best in the film -- shows a strangely calm reaction as they gather up the part that had ended up on the side of the road and the edge of the woods.

There's also an amusing sequence where Hulot shows the features of the camper car, where each bit had a double duty. It's right out of some of Buster Keaton's work.*

Maria is the catalyst for events. She's American and a master of disregarding traffic laws, leading to the situations that make Hulot's trip a frustrating one. She got the role because her millionaire lover was going to finance the film. Tati had lost a fortune in on his previous film, Playtime, and had troubles getting financing, so he jumped at the chance. Kimberly was a model in the US and acquits herself well.

Another nice technique is that the film doesn't use subtitles. Dialog -- not a lot of it -- switches from one language to another, so if you don't know the word, someone will repeat it in another. This sounds clunky, but it comes across as perfectly natural.

Admittedly, the film doesn't reach the heights of Tati's best, but even this, his least successful film, you can see the signs of his comic genius.

Posted by Chuck Rothman at 6:40 PM