The Mayor of Hell 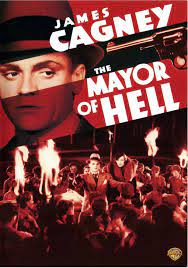 People often make the charge that modern films are too "woke," usually meaning that they are conscious of social issues. They don't seem to know that films have been dealing with social issues almost from the beginning. Warner Brothers especially became known for stories showing society's losers and The Mayor of Hell is a prime example.

We fist see a group of boys, let by Jimmy Smith (Frankie Darro) who are running some minor scams on the people. They get caught and some of the gang, including Jimmy, are0 sentenced to reform school.  The school's superintendent, Thompson (Dudley Digges), treats his charges with a firm hand, while enriching himself. This is upset when the deputy commissioner, Patsy Gargan (James Cagney) shows up and begins to reorganize the place, treating the boys with respect, giving them decent food, and setting everything up a democracy.

Considering that at the period, Cagney was usually playing tough guy roles.* He's tough enough to earn the respect of the boys, but clearly is looking for them to be well treated.  Madge Evans plays the nurse at the reformatory, who urges him to do what is needed to help the boys.

Of note is the performance of Allen "Farina" Hoskins. He was a major star of the Our Gang silent comedies -- possibly the most successful Black actor of his time. By this point, he had aged out of Our Gang and was struggling to find roles. One good thing was that he was treated by all the boys as an equal and didn't resort to the usual stereotypical behavior.

The social commentary in the movie is more than obvious and Thompson ends up getting more than his due. The point was especially important in the 1930s, when people sometimes skirted the law due to poverty.

Posted by Chuck Rothman at 4:31 PM