He Ran All the Way 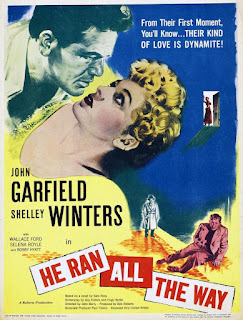 The Hollywood blacklist ruined careers and lives and perhaps none more than John Garfield.He had burst on the scene after growing up in Brooklyn and his talent for acting was noticed and he was brought to Hollywood, usually cast as a boxer or gangster.*  His final film before his early death was He Ran All the Way.

Nick Robey (Garfield) was a man down on his luck and living with his mother (Gladys George). His friend Al Molin (Norman Lloyd) convinces him to rob a payroll, despite the fact that Nick is starting to get cold feet.Of course, the job goes sour, a cop is killed and Al badly wounded.  Nick goes on the run with the money. When hiding out at a public pool, he meets Peg Dobbs (Shelley Winters).She is charmed by him and he offers to take her home, at which point Nick takes her and her family hostage, using them as hostages until the heat is off.

Garfield is, as usual, excellent.  He capture the character’s desperation, and at the same time manages to make him both sympathetic and potentially dangerous.Shelly Winters was in her early career, when she could still play the ingenue, and she also makes the most of the role, She goes through the movie both repelled and attracted to Nick, so there is some real doubt as to the climax.

This was Garfield’s last film. He refused to name names before House Un-American Activities Committee.  He was blacklisted. The stress, and his long-term heart problems – which he seemed to have ignored – caused his death at age 39. Wallace Ford is also memorable as Peg’s father, who is backed into a corner trying to protect his family.

Writer Dalton Trumbo was under the blacklist at the time, but was able to find work using various pen names. Director John Berry also felt the touch of the hysteria, but found work in Europe before returning to the US once things calmed down, directing the charming romance, Claudine.

Posted by Chuck Rothman at 5:28 PM