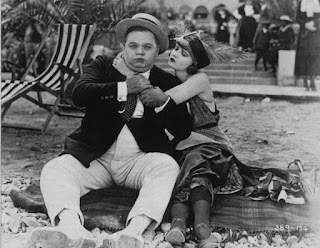 I’ve been curious about this film for decades.

Roscoe “Fatty” Arbuckle* was one of the bigger names of silent comedy. He gave Buster Keaton his start, and was one of Mack Sennett’s biggest stars. Few remember that. They mostly remember the scandal.

To recap, a woman, Virginia Rappe, died after a Hollywood party and a friend of hers claimed Arbuckle raped her, the weight of his body causing her death. It was a sensation. The Hearst papers ran with it,** Arbuckle was eventually acquitted,*** but his career was ruined.

His studio, Paramount had seven films of his in the can and ready to go when the scandal hit. For obvious reasons, they decided not to release them.

I always wondered what the films were like. How would have Arbuckle’s career unfolded if it hadn’t been for the scandal?  I had thought they were lost forever.

Turns out, though several of them were lost, people were able to track down prints of the rest.

Leap Year is the most easily available (on Youtube and archive.org).  It was released in Finland in 1924 so there were prints, and by 1981 it was finally shown in America.

Stanley Piper (Arbuckle) is the nephew of the rich, crotchety Jeremiah Piper (Lucien Littlefield), a hypochondriac who has a full-time nurse, Phyllis Brown (Mary Thurman). Stanley is in love with Phyllis, but through a series of misunderstandings, three women (Harriet Hammone, Gertrude Short, and Maude Wayne) believe that Stanley is proposing to them; all accept. Stanley can’t get them to understand, as well as confusing Phyllis, who is not happy with the situation. The women show up at Stanley’s house and he has to devise ways to break up and keep the women apart from each other.  But every attempt only make them more attracted to him.

How is it? Pretty run-of-the-mill. Slapstick and misunderstanding abound and the plot twists are pretty obvious and contrived. But I’m sure it would have been successful if it could have been released in 1921. On the other hand, I doubt it would be remembered as a classic silent comedy and would not have put Arbuckle up in James Agee’s pantheon.

Arbuckle does make an effective leading man. His weight works against him, but Stanley is basically a decent guy, and he is handsome enough to pull off the role believably.

The film was directed by James Cruze, a veteran silent film director and actor who worked until his 1938, his best-known film these days The Great Gabbo, probably the original evil ventriloquist’s dummy trope.

Arbuckle couldn’t recover from the scandal. He had occasional acting roles, usually in films directed by his friends (who all stood by him during the trials) then switched to directing using the pseudonym William Goodrich. By the late 20s, he directed a series of short subjects under that name for Educational Pictures.**** By 1932, the scandal was far enough in the past for him to get a contract for more short subjects, which did well enough for Warner Brothers to sign him to star in a feature.

He died the day after he signed the contract.

**Hearst is reported as saying it “sold more newspapers than any event since the sinking of the Lusitania."

***The jury saying “Acquittal is not enough for Roscoe Arbuckle. We feel that a great injustice has been done him. We feel also that it was only our plain duty to give him this exoneration, under the evidence, for there was not the slightest proof adduced to connect him in any way with the commission of a crime."

****Leading to one of the funniest mistranslations I’d ever come across.  I have a French-language film encyclopedia which reported he did “educational films,” not understanding that “Educational” was the name of the film company. The idea that the scandal-ruined Arbuckle would be directing films for schools always seemed absurd. Educational Pictures had nothing to do with education; it was a small, low-budget producer of short subjects. Buster Keaton worked there when MGM dropped him and they also were where many bigger stars got their first roles.  They were out of business by 1940