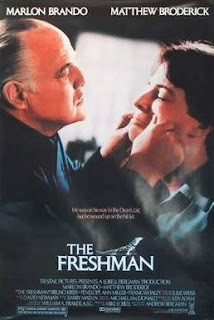 Marlon Brando was one of the greatest movie actors of his generation. He’s best known for his iconic dramatic roles, but he did have a penchant for comedy when he needed it. And one of his great comic turns was in The Freshman.*

Clark Kellogg (Matthew Broderick) is a young man from Vermont who moves to New York City to attend film school. On his first day there, he meets Victor Ray (Bruno Kirby), who proceeds to steal all his belongings. Spotting Victor a few days later, Clark shakes him down for his things, but Victor no longer has anything. He makes an offer Clark can’t refuse: he’ll get him a job with his uncle Carmine Sabatini (Marlon Brando). Sabatini bears more than a passing resemblance to the most famous of movie gangsters, but Clark, needed the money, goes to work for him.

Sabatini is an importer and runs a special dinner club that charges very high prices to eat endangered animals. Clark is soon caught up in smuggling a Komodo dragon to be the latest meal.

Brando, of course, is riffing on his role as Don Vito Corleone from The Godfather. And the movie doesn’t play that down. Clark sees the resemblance, and sees everything that Sabatini does through the mythology of that movie. The humor comes from Clark’s reaction to being drawn into what looks like a very shady enterprise.

Brando appears to enjoy the chance to vamp on the image. He supposedly told Bergman that he saw Sabatini as the real life person that he based Corleone on. He plays it all very straight, which makes it all the funnier.  Broderick plays his role as a man flustered about what he’s gotten into. Bruno Kirby is also good as the scheming Victor.

One major joke that no one will get these days was the use of Bert Parks. Forgotten today, back in the 50s he took over the job of announcer of the Miss America pageant, and for over 20 years he was known singing “There she is, Miss America” when a winner was announced. He ends up singing the same song, as the Komodo dragon wanders in the dining room ready to be eaten.**

Writer/director Andrew Bergman was a vastly underrated creator of comedy of his era. He had cowritten Blazing Saddles, and moved on to directing.  This was one of several successful films, though his career took a hit when he wrote and directed Striptease.

**Parks also sings Dylan’s “Maggie’s Farm,” as incongruous a pairing as ever put on film.