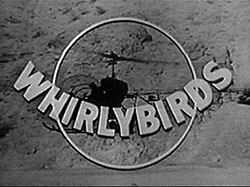 TV spinoffs happen for many reasons, some planned, some because a one-time character catches on with the public.*  Whirlybirds was spun off because the producers became enamored of a helicopter.

It started with I Love Lucy, where one episode featured a Bell helicopter. The producers liked using it so much that they created a series to feature it.

The show was about a small helicopter company run by Chuck Martin (Kenneth Tobey) and Pete More (Craig Hill). They were chartered for various duties, from rescuing people in danger, to carrying cargo, to whatever might be needed.

It was supposed to be part of the regular CBS schedule, but the network turned it down and it went directly to syndication, where it had a respectable run of 111 episodes.

After the show, Tobey had a long career guest starring in TV, while Hill moved to Spain and occasionally appeared in Spanish films.

Posted by Chuck Rothman at 7:28 PM

In our market, Whirlybirds, which I remember fondly, was paired with Highway Patrol in a Saturday afternoon action/adventure bloc.