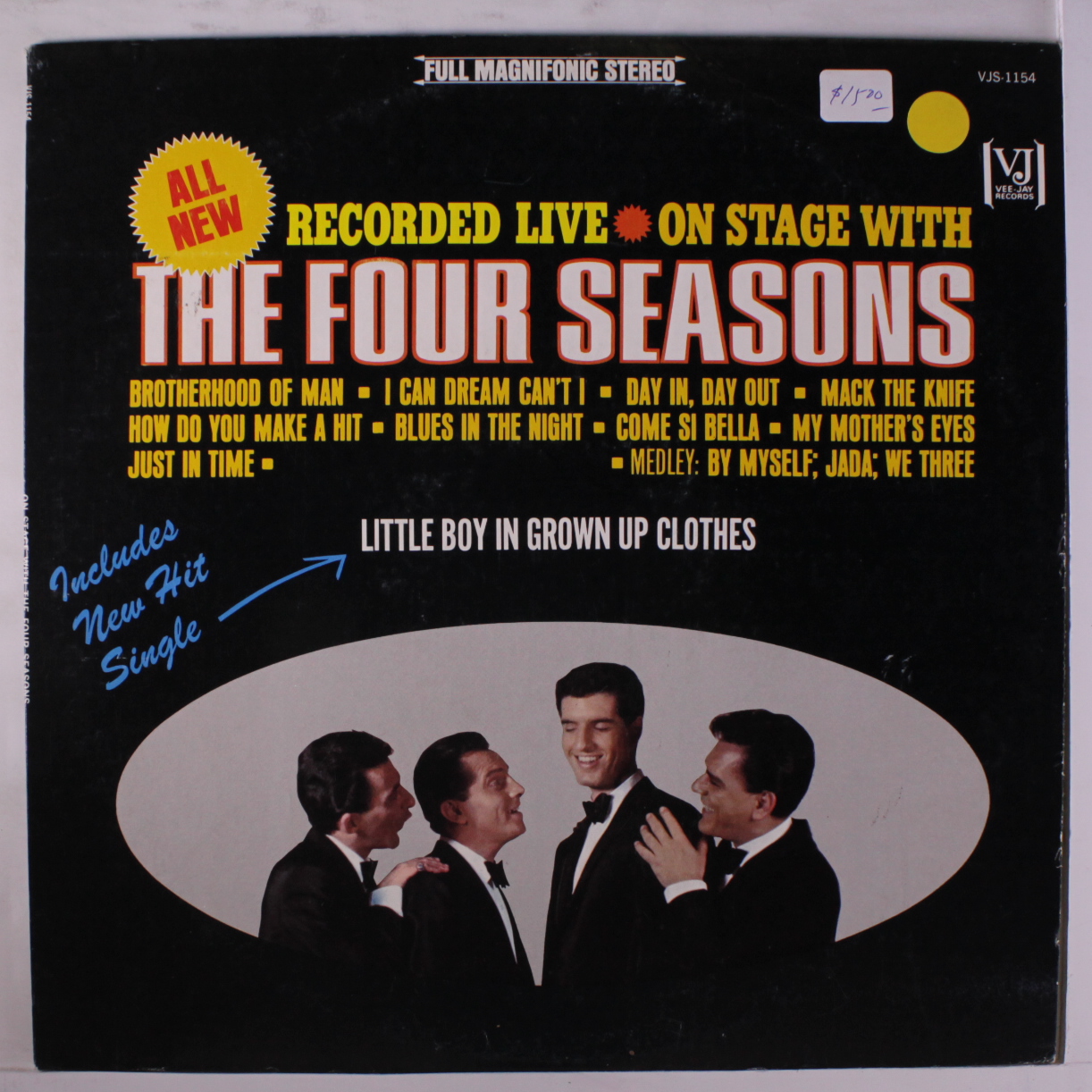 (1966)
One artifact of the music business is the contractual obligation album, where an artist has to produce music for a record company after leaving it. If the breakup was ugly, the musician doesn’t want to have the record company making money from him, so they have to deal with it. The most infamous case was Van Morrison, who improvised 31 ridiculously short (and deliberately awful) songs in one day at the studio.*

The Four Seasons were caught in the same bind when their original label, Vee-Jay stopped paying royalties.  After a lawsuit, they moved on, but Vee-Jay wanted a final album. The result was The Four Seasons Live on Stage.
Despite its name, it is not a live album. It’s recorded entirely in a studio with live audience reactions added – applause, cheering, and everything. There even was banter between songs, to appreciative reactions. It’s actually pretty well done in that respect.
The rest, however, is not what fans would have expected. It contained none of their hits, and was not in their signature sound. Most of it are reworkings of classic 50s lounge songs, probably the type of songs they performed when they were starting out. The titles show this:  “Blues in the Night,” “Just in Time,” “Mack the Knife,” and “Brotherhood of Man” from How to Succeed in Business are  the best known these days.
If you’re expecting the Four Seasons, you’ll probably be disappointed. But if you listen not expecting them, the album is quite good.  The Jersey Boys don’t give the songs short shrift and give enthusiastic performances and actually sell not only the songs but the pretend concert. It’s very Sinatra influenced and has a jazzy vibe that is unusual for the group.
The album done, the group was free to move to Phillips Records.**  Vee-Jay released and almost immediately folded, so it got very poor distribution and was quickly forgotten.
Still, it’s an interesting curiosity.
Note: If you listen to it on Spotify, beware. The tracks are mislabeled. The three-song medley on Track Six is spread across tracks 6-8 and the titles of track 9-11 are really two songs behind their titles – and the final two songs are omitted.
_____________________________________________________________
*I’ve written about John Sebastian’s issue with his record company before
**Vee-Jan introduced the Beatles in the US, but couldn’t handle the demand and started shorting all their artists. And if you can’t make money selling records by the Beatles and the Four Seasons, you’re probably not going to survive.
Posted by Chuck Rothman at 10:30 PM

Believe it or not Vee Jay was to finally collapse into bankruptcy after an executive lost a stack of their operating budget on the tables in Vegas. Can't remember the exact details but the label had no real budget to fully promote the Beatles beacause of this.