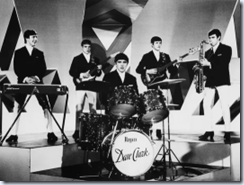 Back in the days of the British Invasion, the main debate as to who was the best of the many groups that were part of it. Nowadays, the two main contenders are the Beatles and the Rolling Stones,* but at the time, there was a third contender who gets little notice today:  the Dave Clark Five.

Clark started the group in the late 50s as the Dave Clark Quintet. After the usual changes of personnel, the group was renamed in 1962 and started gaining success.

Part of this was due to the search for the next big thing after the Beatles. “The Liverpool Sound” stormed the charts and record companies tried hard to find something similar.**  The Five were from North London – Tottenham – so they were promoted as the “Tottenham Sound.”

No matter what the promotion, the Dave Clark Five was a hit.  Their first single, “Glad All Over” knocked the Beatles out of number 1 in the UK and became the first non-Beatles British Invasion song to hit the US hot 100.  It led to an appearance on The Ed Sullivan Show, again, the second British Invasion group to appear there.

The group continued with hits like “Bits and Pieces,” “Can’t You See That She’s Mine.” “I LIke It Like That,” “Catch Us If You Can,” “Over and Over,” and “You Got What It Takes.”  Ed Sullivan liked them so much that the appeared on his show 18 times – more than any other UK music at at the time.  Their songs had a heavy beat and catchy hooks.

The group also followed the Beatles with a movie of their own:  Catch Us If You Can/Having a Wild Weekend. I haven’t seen it, but it looks like it was an ambitious attempt to tell a story other than just being an excuse for the group to perform its hits, but it didn’t make much of an impression.

By 1970, after a string of non-hits, the group broke up.  Unfortunately the story didn’t go on.  Dave Clark managed the band himself and made the smart move of keeping control of their tapes.  Unfortunately, he kept a very close control of them, rarely allowing people to rerelease their material. Clark was a multi-millionaire from other sources, so he didn’t need the money and it was hard to persuade him to release the songs.

It also didn’t help that the band never really projected a personality. Only a die-hard fan could name anyone other than Clark during their heyday, and many people believed it was the name of the singer, not the drummer. So when Clark took the songs off the market after they broke up, they were forgotten, and their influence on the music scene faded to nothing.

Still, they leave a legacy of a string of hits that helped define the musical era.

**The only real successful one was the “San Francisco Sound,” which developed organically.  Indeed, when they tried to create a “sound” of their own in the “Bosstown Sound,” it failed miserably.

Posted by Chuck Rothman at 6:35 PM

All true. It also didn't help that DC was not that nice of a guy. Still, great music.

DC was a terrible drummer. FACT. He was the business head rather than the creative force behind the group's music.

Someone had a good eye for unknown film directorial talent. The director of "Having A Wild Weekend" was John Boorman (Point Blank", "Excalibur", many other fine to brilliant films.