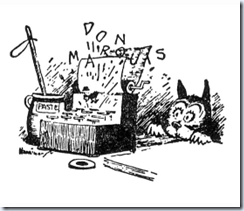 I think Marquis is in The Library Of America, so he's clearly not completely forgotten.