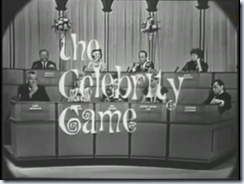 From back the the radio days, there was a specific style of game show, where the game really wasn’t the point. The best-known early example of that was Groucho Marx’s You Bet Your Life, where the game took a back seat to the action. More modern examples include things like The Match Game. In the middle, one nice example of the form was People Will Talk.

The show, hosted by Dennis James, involved asking a group of nine celebrities simple yes-and-no opinion question. Then the contestants would pick a star and say what they thought the answer would be. If they were right, they won money.* It was not intended to be a serious discussion of the question, but the fun was having the celebrity talk about their answers.

Typical questions were “Should there be a different speed limit for women drivers?” or “Are performers really more self-centered and temperamental than other people?”

The show only lasted six months in its original run in 1963. But the next year, it was back again under the name The Celebrity Game. Carl Reiner had taken over as host, but otherwise it was the same as before.

The most memorable part of the show for me was on episode where the question was “Should a man wear a toupee?”  It was the second question of the show, and during the commercial break Reiner, who had always worn a toupee, appeared without it.**

The second run wasn’t much more successful than the first, and was cancelled after five months.

But things weren’t done yet.  It was revived once more a (with Reiner again) in the spring of 1965, probably because it was a relatively cheap filler for a terrible timeslot.***  And it also showed up in reruns in the daytime of late 1967-68.

It clear that creators Heatter and Quigley loved the concept, and finally were able to make it work, when, the next year, they hit the jackpot with nine-celebrity model in The Hollywood Squares.

**This was before the classic Dick Van Dyke Show episode where, as Alan Brady, he appeared sans rug.

***Opposite Hazel and Peyton Place.

Posted by Chuck Rothman at 5:38 PM

I remember the original NBC daytime show, and here's the thing:

The panel on People Will Talk was fifteen audience members, one of whom may have been a guest celebrity.

In the original show, Dennis James would chair a "debate" between two audience people; the panel would vote "yes" or "no", and the debaters would win money based on whether they could pick out which panelists agreed with them; whoever scored best won the game and went to the aftergame.

After about a year on NBC daytime, Heatter and Quigley streamlined the format, reduced the panel to nine celebrities, eliminated the debate angle, and thus: The Celebrity Game.