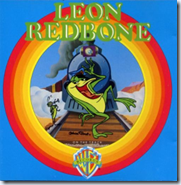 Posted by Chuck Rothman at 4:46 PM

My wife and I were like you and yours. We both loved Leon Redbone. I think I have all his albums. Great stuff.

Redbone's Christmas album is an all time classic. My wife and I were lucky enough to see him live. He always surrounded himself with excellent musicians.

OMNI Magazine ( Another Gone But Not Forgotten item ) ran a compettion corner among their puzzles from Martin Gardner ( Who did puzzles and such for "Scientific American" ) Anyway, they had a competiton one month for "Plausible Rumors".
One is quite relevant, but AFAIK has never been addressed; Leon Redbone is Frank Zappa incognito. The first frame on the YouTube link does nothing to dispel that idea. . . .