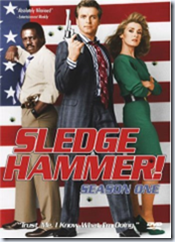 Satire has a checkered history on TV.  It’s hard to keep it going over the course of a series, and even a spoof can flag.  But one of the better examples was Sledge Hammer.

Sledge Hammer (David Rasche) was the gung-ho-est cop in the San Francisco Police Department, teamed up with his best friend and partner, a .44 Magnum.  He believes in shooting first . . . and not asking questions.  His official partner, Detective Dori Doreau (Ann-Marie Martin) acts to try to tone down his penchant for gunplay, all to the frustration of their boss, Captain Trunk (Harrison Page).

The show was completely over the top.  Hammer was an extrapolation of Clint Eastwood’s Dirty Harry.  He wasn’t very bright, had a short temper, and was barely competent, but ended up catching the crooks due to dumb luck.

Rasche was an alumni of Second City in Chicago and does a great job.  The show also had a penchant for ridiculing other TV shows as part of its plot.

The show was not very successful in the ratings.  So much that the producers decided to go out with a literal bang.  In the final episode of the season, a nuclear bomb threatens the city.  It’s up to Hammer to disarm it, and he says his catchphrase, “Trust me.  I know what I’m doing.”

The bomb blows up, destroying Hammer, the cast, and the entire city.

Then came the bad news:  despite the poor ratings, ABC decided to renew it for another series.  Not a problem:  the second season has a title card saying, “The following season of Sledge Hammer! takes place five years earlier that nuclear explosion.” It screwed with the continuity, but no one cared.

It was a funny gem that deserves to be better know.

I still use that catchphrase ("Trust me. I know what I'm doing.") some 30 years later, and even though no one around me typically knows where it comes from.

They took particular aim at MR. BELVEDERE, which was on the same network. Also "Hammeroid" (spoof of ROBOCOP) featured a robot that "performed a humanitarian service"--it would slap your hand when you reached for the TV remote/knob. Its creator then explained he was "programmed to stop anyone from watching DESIGNING WOMEN".

I loved that show. The lovingly photographed .44, on a satin pillow no less...just loved it.