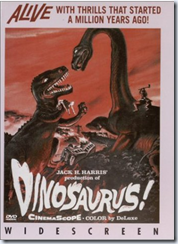 (1960)
Directed by Irvin S. Yeaworth, Jr.
Written by Jack H. Harris, Dan E. Weisburd, Jean Yeaworth
Starring Ward Ramsey, Paul Lukather, Kristina Hanson, Alan Roberts. Gregg Martell, Alan Roberts
IMDB Entry
I don’t particular like scary movies.  To me, they are like a practical joker tripping you as you walk by – my main emotion is annoyance, not fright.  There is only one movie that actually scared me when I saw it, and that was Dinosaurus!  It probably was because I was eight at the time, because watching it today makes it only seem silly.
But fun.
In the movie a group of Americans are working on a Caribbean island, when they stumble across a find:  two dinosaurs and a cave man (Gregg Martell),* all exceptionally well preserved.  During a storm, they are struck by lightning and, as Dr. Henry** Frankenstein proved, lightning brings the dead back to life.  So a giant brontosaurus*** is roaming the island, along with – of course – a tyrannosaurus rex.****
Meanwhile the cave man becomes friends with a boy of the island, Julio (Alan Roberts) and suffers from the culture shock of 20th century civilization.

****Has there ever been a dinosaur movie without a T. Rex?
Posted by Chuck Rothman at 3:39 PM