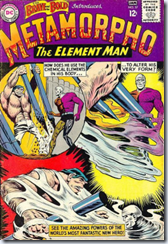 Comic book heroes come and go, and it’s hard to keep track of which of the older ones are still around, but one of the most interesting heroes of the early 60s was Metamorpho, since it didn’t follow the usual tropes.

Metamorpho was created by Bob Haney.  DC at the time was trying to create offbeat and “different” superheroes, and Metamorpho certainly fit.

Rex Mason was an adventurer hired by unscrupulous millionaire Simon Stagg to retrieve the “Orb of Ra” – a one-of-a-kind Egyptian artifact hidden in a pyramid.  On the way to Egypt, Rex fell for Stagg’s daughter, Sapphire, giving Stagg a reason to dislike him.  When trying to steal the orb, Rex is knocked out by Simon’s henchman Java* and exposed to the Orb.

As everyone knows, being exposed to magical devices causes great changes and Rex turned into a strange looking man with a chest that was half orange and half purple, with a ghostly white head and legs of mismatched colors.  He also developed the ability to change into any element.

Unlike most heroes, Rex hated the transformation and wanted to return to being human.  He also wanted to leave Simon Stagg’s employ, but Stagg discovered that Rex’s only weakness was the Orb, and used that to control him.  So Rex took on the name Metamorpho and reluctantly became a superhero.

The series premiered in The Brave and the Bold** in January 1965. It must have been a big hit, since he was given his own comic within a year.  The comic had a high degree of parody in the way it portrayed the villains Metamorpho faced, but Rex’s plight was handled seriously:  he hated being a superhero and looked for ways to become human again, even turning down a membership in the Justice League because he expected to change back.

The comic ran for 17 issues.  A female version, Element Girl, joined him for a few episodes*** and Metamorpho joined the Outsiders over the years.

***Her most memorable appearance was years later in Sandman #20.

Java was a Neanderthal who had been in suspended animation. He was discovered by Rex Mason and revived by Simon Stagg.